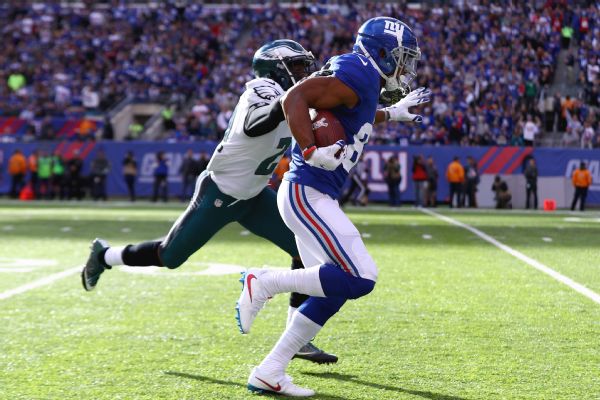 EAST RUTHERFORD, N.J. -- A sprained ankle is expected to keep New York Giants wide receiver Victor Cruz out of Monday night's matchup with the Cincinnati Bengals, according to sources.

Cruz will be inactive and miss his first game of the season, according to an NFL Network report.

The Giants are playing it safe with Cruz, who suffered a low-ankle sprain last Sunday in a win over the Philadelphia Eagles. They want him healthy for the stretch run.

Cruz, 30, did not practice this week. He was able to do some running on the side with trainers.

Veteran Dwayne Harris and undrafted rookie Roger Lewis are expected to take most of Cruz's snaps on Monday Night Football (8:30 p.m. ET, ESPN/WatchESPN). Harris started against the Eagles because of his blocking ability, and Lewis caught a 30-yard touchdown pass later in the contest against the Eagles in Cruz's place.

Tavarres King should also be in the Giants' wide receiver mix against the Bengals.

After having missed most of the past two seasons, Cruz played over 90 percent of the snaps the first seven weeks of the season. But the Giants appeared to be scaling back his playing time coming out of the bye week.

"I think coach is just taking care of me a little bit," Cruz said last week. "He came up to me and said that they were going to move some guys around and just making sure that everyone is fresh and that they are using all of our tools out there."

Cruz was injured while making a 40-yard reception down the right sideline against the Eagles. He stayed on the field for the remainder of the drive but could be seen looking at the ankle after trying to run. The former Pro Bowl receiver had an X-ray and MRI, and both came back negative.

The Giants and Cruz remain optimistic about his long-term outlook this year. They've been extra-cautious with him throughout the week given his injury history. The Giants are trying to prevent the ankle injury from mushrooming into more leg problems.