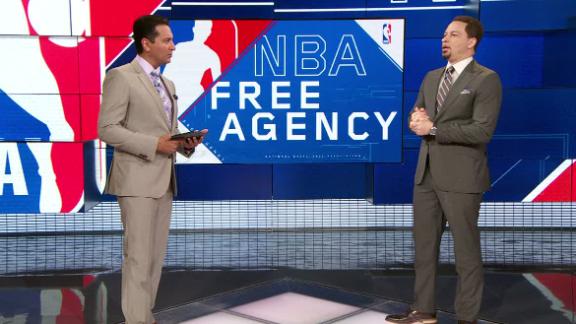 The Grizzlies, according to league sources, also have interest in Mavericks free-agent swingman Chandler Parsons, who is widely expected to leave Dallas this summer in free agency, given the team's focus on other free-agent targets.

ESPN reported last week that Conley and Miami Heat free-agent center Hassan Whiteside are Dallas' top two free-agent targets. But Grizzlies officials, sources say, remain confident about their chances of retaining Conley and have Parsons high on the list of wing players they want to sign with the rest of their salary-cap space.

Conley will meet with the Mavericks on Friday, league sources told ESPN.

Conley, 28, wants a five-year maximum deal from Memphis, and if the Grizzlies refuse to go beyond four years, Conley could leave, a source told ESPN. Under league rules, Memphis is the only team that can offer Conley a five-year contract worth a maximum of $153 million. A four-year max deal for Conley would be worth $113.6 million.

Atlanta Hawks swingman Kent Bazemore is another wing target of prime interest to Memphis, sources say, but Bazemore will not be holding free-agent meetings with potential suitors until after July 4.

The Mavericks, according to sources, remain interested in keeping Parsons if they aren't able to persuade Conley and/or Whiteside to come to Dallas. However, the Mavericks have made it clear to Parsons that they do not intend to offer a max contract to keep him. Both of his two seasons in Dallas ended prematurely because of surgeries on his right knee.

Parsons, 27, had hybrid microfracture surgery on his knee in spring of 2015, and the rehab from that operation lasted well into the 2015-16 season. The arthroscopic operation Parsons underwent this spring to address a torn meniscus in the knee wasn't nearly as serious as the previous surgery.

Sources say multiple renowned orthopedic specialists have given Parsons clearance to resume full basketball activities and expressed optimism that his knee would not prevent him from having a long, productive NBA career.

Parsons averaged 13.7 points, 4.7 rebounds and 2.8 assists in 61 games last seasons, statistics skewed by a slow start as he dealt with strict minutes restrictions.

He had the best statistical stretch of his five-year career in the two months before his season ended, averaging 18.9 points, 5.9 rebounds and 3.2 assists per game while shooting 51.9 percent from the floor and 47.7 percent from 3-point range and proving he could thrive at power forward in addition to small forward.

ESPN's Tim MacMahon and Chris Broussard contributed to this report.