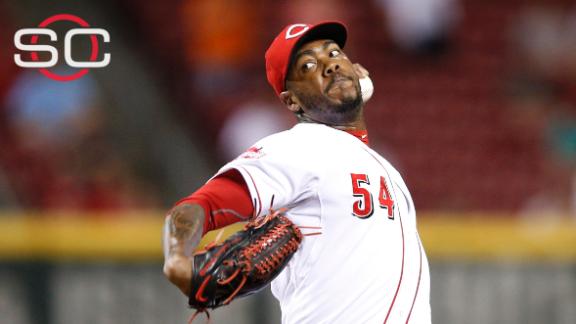 The Yankees acquired Chapman fromCincinnatilast month after a proposed trade between the Reds and Los Angeles Dodgers fell apart when a Florida police investigation into an accusation of domestic violence involving Chapman became public.

"In this country, when allegations are brought against a person, that person is completely innocent until proven otherwise. Not the other way around," Steinbrenner said Wednesday at baseball's owners meetings.

According to a police report, Chapman's girlfriend told officers he pushed her, put his hands around her neck and choked her during an argument. Police said there was not sufficient evidence to charge Chapman, and his lawyer denied the reported allegations.

Major League Baseball is investigating and could discipline Chapman under its new domestic violence policy.

The Yankees sent right-handers Caleb Cotham and Rookie Davis and infielders Eric Jagielo and Tony Renda to Cincinnati in the trade. Chapman will close for a Yankees bullpen that also includes Andrew Miller and Dellin Betances.

Said Steinbrenner, "We did as much research as we possibly could, and that's what I'm going to do any time I'm looking to get rid of some of my good young talent or spend $100 million signing a free agent."