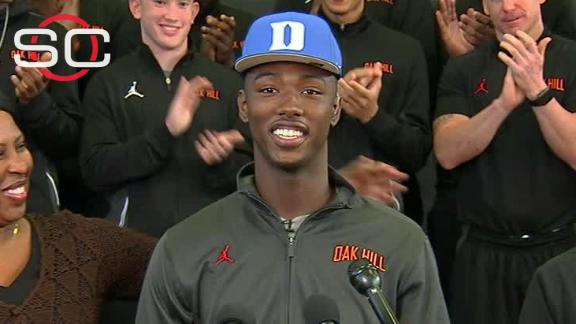 Harry Giles, the No. 1 recruit in the Class of 2016, announced Friday on ESPN that he will attendDuke. Giles chose the Blue Devils over Kentucky, Kansas and Wake Forest.

Giles made the announcement one day after his father confirmed to ESPN that the 6-foot-10 forward will miss the remainder of the 2015-16 season at Oak Hill Academy (Virginia) because of a partially torn right ACL.

Giles, who previously recovered from a torn left ACL, MCL and meniscus to become the nation's top recruit, suffered the latest injury while driving to the basket early in a game on Tuesday night.

An important factor in Giles' decision was the relationship with ESPN No. 2 recruit Jayson Tatum, the St. Louis-area star and Giles' teammate in international play. Both players were part of an under-19 group that won a gold medal for USA Basketball in Greece at this summer's world championship.

"We were roommates in USA Basketball this past season," Tatum told ESPN. "When you spend over 30 days together, you either grow closer or apart. We got closer."

Giles' presence in a recruiting class that also includes ESPN 100 talents in small forward Tatum (No. 2), combo guard Frank Jackson (No. 14) and power forward Javin DeLaurier (No. 44) helps coach Mike Krzyzewski's team vault past Michigan State for the top spot in the ESPN class rankings. Duke, which is also in the running for five-star forward Marques Bolden (No. 20), finished with ESPN's top-rated class in 2015.

With Giles' commitment, Duke has now landed the nation's No. 1 player in two of the past three seasons. The top player in the 2014 class, Jahlil Okafor, led the Blue Devils to a national title in 2014-15 before being drafted No. 3 overall by the NBA's Philadelphia 76ers earlier this year.

Giles will play college basketball not far from his home of Winston-Salem, North Carolina. He previously played high school basketball at Wesleyan Christian Academy in High Point, North Carolina, before transferring to famed high school hoops powerhouse Oak Hill this summer. A dominant and versatile power forward on both ends of the floor, Giles averaged 23.9 points, 12.5 rebounds and 3.3 assists per game in leading the Trojans to a 29-5 record and Class 3A runner-up finish in 2014-15.

Giles had a strong summer campaign on the Amateur Athletic Union circuit, as he was named MVP of the Nike EYBL. He led his CP3 team to a semifinal appearance at the Peach Jam, where he averaged 18 points and 11 rebounds per game. 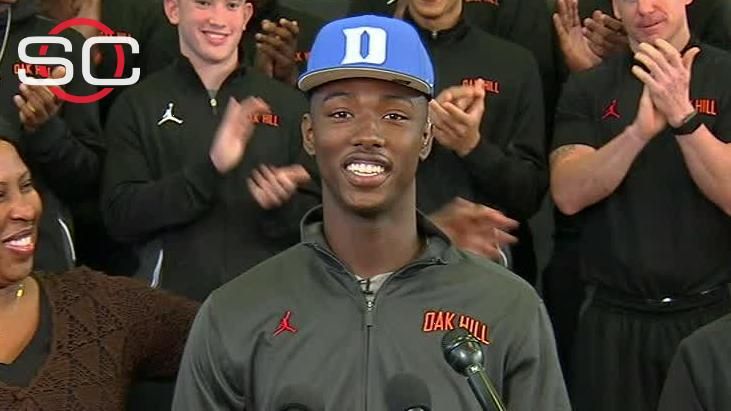