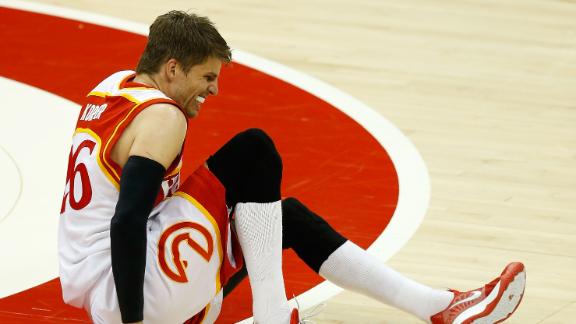 ATLANTA -- While theHawks got a surprise start fromDeMarre Carrollin their94-82 loss to the Cleveland Cavaliersin Game 2 of the Eastern Conference finals,some of Carroll's teammates did not fare as well.

Despite suffering a left knee sprain 48 hours earlier in Game 1 of the series, Carroll went from game-time decision to slotted into the starting lineup approximately 20 minutes before tipoff at Philips Arena. He finished with six points on 2-for-6 shooting and three rebounds in 34 minutes of play, a team high for Atlanta. He didn't register an assist, block or steal.

For the bulk of his minutes, Carroll drew the assignment of defending Cavaliers forward LeBron James. Carroll was the primary defender on 16 of James' 31 plays, according to ESPN Stats & Info.Against Carroll, James scored 12 of his 30 points on 5-for-13 shooting and turned the ball over twice.

Hawks coach Mike Budenholzer said Atlanta was relieved Carroll was able to return, considering what the team thought the extent of the injury might be.

"I think, physically, DeMarre was in a pretty good place," Budenholzer said. "Considering the injury and what happened two nights ago, for him to be able to bounce back is a real statement for DeMarre, how he takes care of his body, how much work and time he puts in with our training staff, massages, various people that, I think, allowed him not to be as injured as seriously as we were all worried."

Shooting guard Kyle Korver, meanwhile, sprained his right ankle when Cavaliers guard Matthew Dellavedova rolled into him while the two were pursuing a loose ball. Korver hobbled down the floor on the ensuing possession, but the Hawks called a timeout to give Korver an opportunity to come out of the game. He limped off the floor into the locker room and did not return.

Korver was seen on crutches in the locker room area and was not available to the media while he received treatment. X-Rays were negative.

A few minutes later, in the opening possession of the fourth quarter, Hawks big man Al Horford banged his right knee. Horford went to the bench for examination but returned to action.

Just over an hour before the game, Carroll warmed up with Hawks assistant coaches on the team's practice floor beside their locker room in Philips Arena. Carroll labored through noncontact drills, grimacing quite a bit on lateral movements. He was then examined by the team's medical staff in the trainers' room and received additional treatment.

Carroll injured his knee on a fast break in the fourth quarter of Game 1, when he landed awkwardly on his left foot as he gathered the ball to elevate for a layup attempt. He was being guarded by Cavs wing Iman Shumpert, but there was no contact on the play. Carroll was helped to his feet and couldn't put pressure on the leg as he was helped off the floor to the locker room.

X-ray and MRI results Thursday showed no structural damage in the knee, nor any ligament or cartilage tears. Carroll was diagnosed with a knee sprain and a bone bruise. Hawks players and coaches expressed relief that Carroll's injury wasn't as severe as initially believed, based on events Wednesday.

Carroll is in the final season of a two-year, $5 million contract with Atlanta and will become a free agent this summer.

Korver suffers ankle injury in Game 2
Hawks guard Kyle Korver leaves the game after rolling his right ankle in the third quarter of Atlanta's 94-82 loss to the Cavaliers.