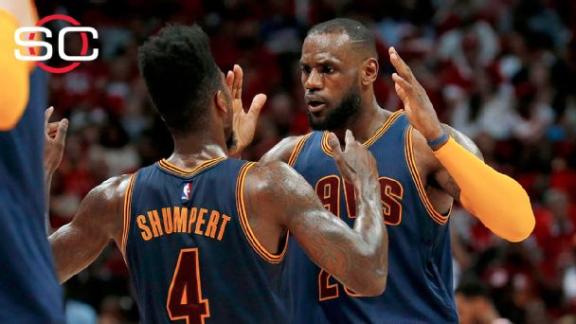 ATLANTA -- Down 2-0 to the Cleveland Cavaliers and headed on the road, the Atlanta Hawks are badly in need of confidence. Kent Bazemore made an attempt to give them some with brash statements Friday night.

The Cavs won Game 2 emphatically94-82, despite not having Kyrie Irving due to hisknee injury. Bazemore, however, is staying confident and believes the top-seeded Hawks still have the better team.

"We played them in the regular season this year and got the best of them," Bazemore said in reference to the Hawks' 3-1 record against the Cavs this past season. "I still think we're the better team. We just haven't shown it yet."

Bazemore scored seven points in 12 minutes off the bench and spent some time guarding LeBron James, who scored 30 points with 11 assists and nine rebounds.

"The bright side is we haven't played well the first two games. We still think we're the better team. We'll try to get two up in Cleveland," Bazemore said. "We've got to play angry."

The Hawks got a boost when DeMarre Carroll, who suffered a sprained knee in Wednesday's Game 1, was able to play Friday, though he was largely ineffective. All-Star Kyle Korver also went down in the second half with a sprained ankle and did not return.

With the injuries piling up and the Cavs catching fire from the outside -- they hit 12 3-pointers Friday -- the Hawks fell down 20 points and didn't resemble the 60-win team from the regular season. Bazemore, though, was keeping faith that his team could turn it around.

"We got a little frustrated. We got a little rattled," Bazemore said. "There's a lot of basketball left. They came here and got two. No reason we can't do the same thing up there."

Cavs take Game 2 minus Kyrie Irving
SportsCenter Highlight of the Night: LeBron James scores 30 points to go along with 11 assists and nine rebounds in Cleveland's 94-82 win over Atlanta, and the Cavaliers take a 2-0 lead in their best-of-seven series.