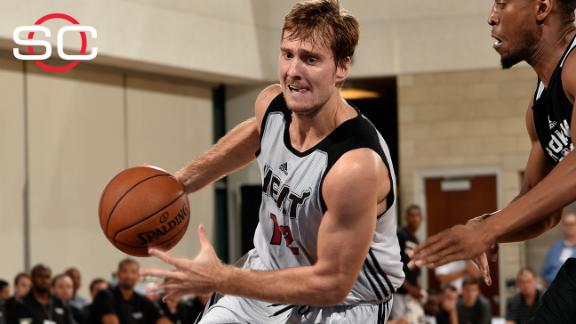 The Boston Celtics have acquired guard Zoran Dragic and a 2020 second-round pick from the Miami Heat, the teams announced Monday.

Dragic, whose brother Goran signed a five-year, $85 million deal with the Heat earlier this month, averaged 1.8 points in 16 games with the Heat and Phoenix Suns last season.

The trade did not upset Goran Dragic, who is hoping his brother will get more chances at playing time in Boston, sources told ESPN's Dan Le Batard.

With the Celtics taking on Dragic's $1.7 million guaranteed salary and the Magic taking on Napier's $1.3 million, the Heat have potentially shaved off more than $11 million in salary and luxury taxes for the upcoming season.

The final numbers won't be clear until the Heat's payroll is finalized, but a few days ago, they were about $10 million over the luxury-tax line and in position to pay the repeater luxury tax. That $10 million would have cost them about $26 million in taxes. These two moves have taken off $3 million in salary and about $8.3 million in potential corresponding tax.

The Celtics were able to take Dragic into their salary-cap space. They have carefully ordered transactions this summer to save space for this purpose, delaying the signing of Jae Crowder to a five-year, $35 million deal and a swap of Gerald Wallace for David Lee to have the cap space free to take on contracts. Boston acquired Perry Jones from the Oklahoma City Thunder in a similar deal.

The Lee trade was announced Monday, and the Crowder signing is also expected to be finalized today.

When all of Boston's deals are completed, the Celtics will have 17 guaranteed contracts for the 2015-16 season. While Boston will leap above the cap with these moves, the team will remain comfortably below the luxury-tax line and can afford to simply eat guaranteed contracts if it is unable to further maneuver before the start of the season.

The Celtics, with 11 players making less than $3.5 million next season, should have a competitive camp with players on the back end of the roster fighting for jobs.

The team was essentially at its 15-man maximum before bringing in Dragic and Jones. Even if those two players are ultimately waived, Boston will have collected two second-round picks for its troubles, and the team has clearly embraced asset collection during this rebuilding process.