Indians-Red Sox ALDS Game 3 has been rained out, will play Monday 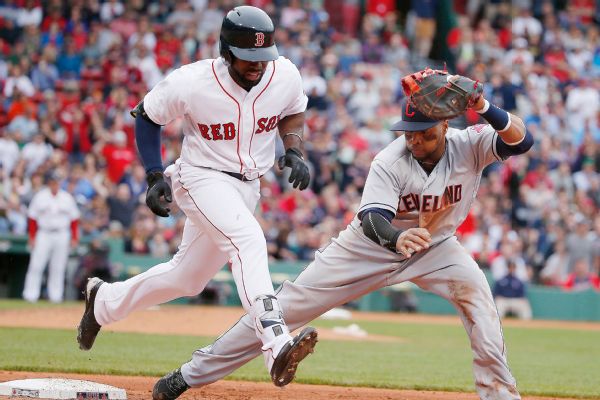 Josh Tomlin is just fine waiting another day to make his postseason debut.

The Indians right-hander said he was treating Sunday as a regular off-day after rain washed out Game 3 of Cleveland's AL Division Series against Boston. But instead of building on the success from the 2-0 lead in the best-of-five series, he will take the mound after both teams had extra rest.

"We had a few days off after the regular season, too, and we played two pretty good games'' in the ALDS, Tomlin said outside the visitor's clubhouse at Fenway Park shortly after the game was postponed. "So I don't know if it hurts our momentum or not.''

Sunday's scheduled 4:08 p.m. start was called off around 2 p.m. -- long before the gates had opened or the starting pitchers had begun to warm up; it will be made up at 6:08 p.m. on Monday.

Cleveland outfielder Lonnie Chisenhall said having two days off in a row was "like a short All-Star break.''

"You don't want to burn a starter trying to squeeze a start into a window,'' he said. "You want to give a game a chance to get played with no things looming.''

Tomlin said he had gone through his usual pregame routine but hadn't gone to the bullpen to start throwing like he would before a start.

Red Sox manager John Farrell said he would stick with Clay Buchholz for Game 3 but wouldn't commit beyond that. Boston reliever Brad Ziegler said the team was "completely confident'' with Buchholz on the mound and the season on the line.

"He's been throwing the ball great coming down the stretch and he's got World Series experience. He's got playoff experience,'' Ziegler said. "And if nothing else, maybe the day of rain gives everybody else a day of rest and gives us a chance to bring those guys back.''

The Indians won Games 1 and 2 at home, beating Boston's two best pitchers and setting the stage for a sweep at Fenway on Sunday. The rainout pushes that back one day -- at least -- and could extend David Ortiz's career for another day as well.

Indians manager Terry Francona said his team's rotation is likely to stay the same for Games 4 and 5, if necessary. But now Game 1 starter Trevor Bauer would be back on the regular amount of rest on Tuesday.

Corey Kluber can pitch in Game 5 -- or, if the Red Sox don't last that long, wait for AL Championship Series.

In the Red Sox clubhouse, Ortiz's son D'Angelo waited dressed at his locker for his dad to leave with him -- maybe for one of the last times. Xander Bogaerts played cards with teammates. Sandy Leon spoke wearing a knit cap perfect for the cool weather ahead.

With the rainout, the Red Sox could come back to 22-game winner Rick Porcello in Game 4 on the usual four days of rest. David Price would be lined up to start a decisive fifth game, leaving Eduardo Rodriguez as the odd man out.

Rodriguez said he hadn't been told of the team's plans.

"I was going to be in the bullpen today anyway, being a starter, reliever or whatever,'' he said. "I'll throw my bullpens and get ready for whatever they want me to do.''