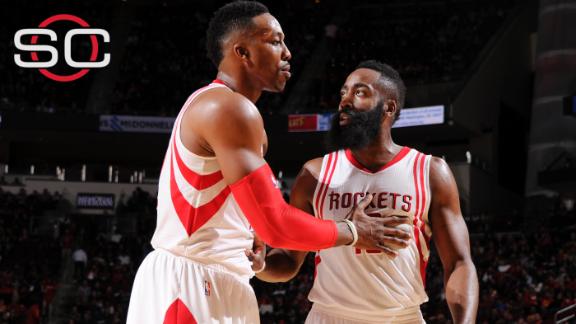 The Rockets enter the All-Star break at 27-28 after a 116-103 loss to the Portland Trail Blazers on Wednesday night.

"We're broken," Bickerstaff said. "It's that simple. We're a broken team, and we all need to use this break to figure out how we're going to impact change. If we don't want to impact change, then we need to be made aware of that, too, and we'll go in a different direction.

"We can't continue to go out and play this way. It's easy to see it's a fragmented bunch. You can't win that way."

After the loss, Rockets center Dwight Howard and guard James Harden met with general manager Daryl Morey and Bickerstaff "long into the night" to discuss the team's woes. Howard was in good spirits after the chat, according to ESPN's Calvin Watkins, but wouldn't get into specifics about the meeting.

With expectations raised, the Rockets got off to a 4-7 start, leading to the firing of coach Kevin McHale.

Under Bickerstaff, the Rockets have gone 23-21, and the loss to the Blazers pushed them from the seventh seed in the West to ninth.

"If you look at it, the chemistry is not quite where you would like it, and hopefully the break can be what we need to get away from each other," Terry said. "It's like a marriage. You might need time away to get back right. I've seen worse."

Howard,when told about Bickerstaff's comments, said he didn't want to talk negatively about his team. Howard did say he is shocked by the Rockets' record and noted that his teammates have to start playing together.

When asked what about the team is broken, Howard said, "I'm not going to talk about what's broken. It's all we do is we talk about the issues that we have. Nobody is being positive."

Harden, the Rockets' leading scorer,said Bickerstaff told the team it was broken after Wednesday's loss. Harden said he didn't know how to fix it.

However, Morey told ESPN that, considering the expectations, he is disappointed in the performance of his team.

"We're obviously not playing at a level we need to be," Morey said. "We will keep battling until we are."