Is Collin Sexton (or someone else) this year's Kemba Walker? 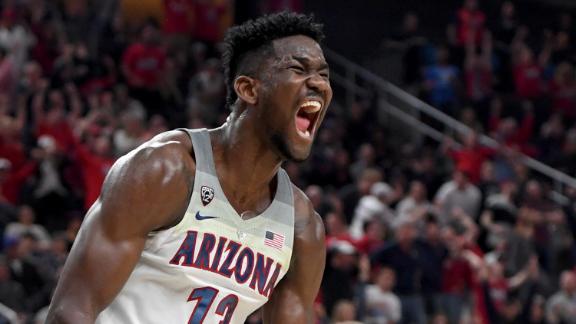 Some years, we're presented with a collection of teams too strong for the underdogs of the NCAA tournament to surmount.

Both the 2004-05 and 2008-09 North Carolina squads had multiple first-round NBA draft picks on teams most picked to win the title before the season started. The 2011-12 Kentucky team had Anthony Davis, one of the five best players in the NBA right now. And the 2012-13 Louisville squad played an aggressive brand of defense that pointed to a national title that season, too.

But this NCAA tournament feels closer to 2010-11 when Kemba Walker led UConn to the national title after a turbulent regular season or 2013-14 when Shabazz Napier repeated the feat with the Huskies.

Which players could be the Walker or Napier and single-handedly take over the tournament this season? We'll tell you.

Long before Collin Sexton pushed Alabama into the NCAA tournament with a brilliant SEC tournament performance, including a buzzer-beater in his team's opening round win over Texas A&M, he was a fabulous point guard overshadowed by the Trae Young movement that unfolded as the season progressed.

But ask around. Anyone who watched him at the high school level or witnessed his efforts earlier this season are not surprised by that exhibit in St. Louis.

After a fight in the second half of a game at Minnesota, officials tossed Alabama's entire bench after players walked onto the floor during the scuffle, which left Avery Johnson's squad with just five players in the final 12 minutes -- and then just four after Dazon Ingram fouled out seconds later and three near the 10-minute mark when John Petty suffered an ankle injury. With just two of his teammates available in the final 10 minutes due to injuries and ejections, Sexton (40 points) nearly led the Crimson Tide to a win over Minnesota in a "three-on-five game" in November.

With every NBA team represented by a scout of executive at the McKale Center, he scored 30 points at Arizona in December.

He's a top-10 pick, a player capable of stringing together six 30-point efforts over the next three weeks and leading Alabama to a championship in basketball.

This is still the same player who led the nation in scoring and assists. As a freshman. Think about that.

After a well-publicized late-season collapse, we could debate Oklahoma's at-large status, but that's not necessary. Young and Oklahoma secured an invitation. And that's what matters right now.

Young is a difficult matchup for teams who will have limited time to scheme against him.

Oklahoma lost to Kansas only after the Sooners defeated the Jayhawks in Norman, where Young finished with 26 points, 9 assists and 4 rebounds in their first meeting. Four of the Big 12 teams that defeated Oklahoma this season suffered a loss to Young's squad in their first encounter.

Now, you'll see a bunch of teams that have never seen Young try to stop one of the most unique players in the game. He's the same kid who put up 29 points in each win over ranked USC and Wichita State squads. He's the same guy who made 43 percent of his 3-pointers in a win at TCU.

Yes, February was a disaster for Young and his crew. Well, Kemba Walker finished 4-7 in his last 11 regular-season games before he led Connecticut to a national title in 2011. Young finished his regular season with a 4-8 record in Oklahoma's final 12 games.

Young could become a hero again in March.

Stop with the misguided comparisons.

Deandre Ayton is not Dwight Howard. Howard never had this burst, skill set or agility.

He's closer to a young Shaquille O'Neal. But young Shaq couldn't hit 3-pointers. Ayton is, however, the most freakish athlete since the former NBA legend and TV analyst signed with LSU in the late 1980s.

First, Ayton is a legit 7-foot-1, 260 pounds. And it's all muscle. He can grab a quarter off the top of the backboard.

At this level, he's also unstoppable.

It's not crazy to imagine Ayton launching a 30/20/5 campaign from Boise, Idaho, to Atlanta to San Antonio over the next three weeks.

He's averaging 20.3 PPG, 11.5 RPG and 1.9 BPG this season. But his 32-point, 18-rebound game in a win over USC in the Pac-12 title game showcased his dominance and potential. If Ayton decides to carry the Wildcats to a title, who will stop him? Not sure, but good luck.

Many called Michael Porter Jr.'s decision to return from back surgery and play 23 minutes in his team's loss to Georgia in the SEC tournament a mistake. He finished 5-for-17 (12 points) and collected eight rebounds.

That's not the Porter who was, at one time, the top recruit in his class. And that's not what a healthy Porter would look like.

The latter is a 6-foot-10 athlete who can hit shots from anywhere on the floor and control a game.

If anything, Porter seemed out of shape in St. Louis last week.

But he has a higher ceiling than any player in the NCAA tournament not named Deandre Ayton. And he's backed by a Missouri squad that has made nearly 40 percent of its 3-pointers this season.

If Porter finds a rhythm, he could lead the Tigers to the title.

Kentucky's up-and-down season sent it into a dangerous 5-seed slot and opening-round matchup against Davidson in Boise.

But the Wildcats have demonstrated a renewed chemistry and efficiency in this 7-1 stretch over the past eight games. It's also still unclear if the Wildcats have hit their stride following the first four-game losing streak of John Calipari's tenure.

They're one of the most intriguing teams in NCAA tournament, though. And Shai Gilgeous-Alexander (29 points, 7 rebounds, 3 assists, 2 steals in the SEC tournament title game win over Tennessee) is the commander of this soaring squad.

The 6-foot-6 guard has become the maestro to this team. Not only does this team collect 1.21 points per possession with Gilgeous-Alexander on the floor, the Wildcats also secure a ridiculous 54.8 percent of their missed shots, per hooplens.com.

He's a big guard and matchup problem for most teams and the key to Kentucky's national title aspirations.

Right now, Marvin Bagley III should be preparing for his senior prom. Instead, he's chasing the No. 1 spot in this summer's NBA draft and Duke's third national title since 2010 after reclassifying into the 2017 recruiting class last summer.

Earlier this season, Mike Krzyzewski called Bagley "the most unique talent I've ever coached." This is a veteran coach who has had players named Jay Williams, Elton Brand, Shane Battier and Grant Hill on his rosters.

In the final seconds of a tied game against Texas in the PK80 tournament in Portland over Thanksgiving weekend, Krzyzewski didn't call a play. He just let Bagley go.

And that's the confidence you should have in his ability to bulldoze every team on Duke's path and lead the Blue Devils to a championship.