Jae Crowder: Durant-to-Warriors 'like a slap in the face' 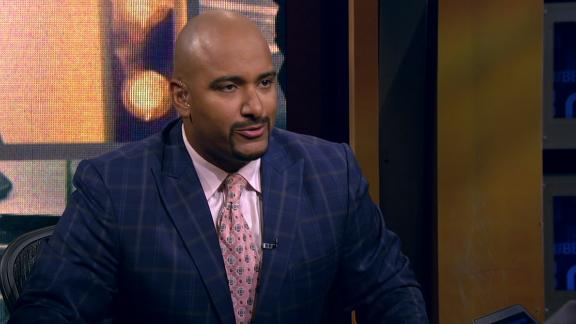 During an appearance at the Basketball Hall of Fame on Thursday, Crowder repeatedly expressed dismay that Durant elected to join a "super team" rather than continue to fight against the one that won an NBA-record 73 games last season. The Celtics were one of six teams that made a sales pitch to Durant at the start of free agency earlier this month.

"We were the only team in the NBA to beat [Clevelandand Golden State] on their home court. The only team in the NBA, the Boston Celtics," Crowder told MassLive.com. "We told him that. We played him clips from both games and told him basically the scouting report of how we guarded Steph (Curry)and Klay (Thompson) -- our entire game plan, basically. That's what made me mad. We f------ told him everything we do to beat these guys, and we beat them, and he went and joined them. ...

"I felt like afterward, I was talking to Isaiah (Thomas), like maybe after you sit back, you shouldn't have told him everything, but who the f--- thought he was going to Golden State, realistically? It was like a slap in the face for us, basically."

Crowder, who was part of the Celtics contingent that traveled to the Hamptons to pitch Durant earlier this month, echoed what many in the traveling party already have said: Boston emerged from its meeting feeling as if it had made a real strong pitch. Crowder felt that, if Durant decided to leave the Oklahoma City Thunder, the Celtics had to be considered a front-runner to pry him away.

While wrapping up a question-and-answer session during the Hall's "60 Days of Summer" program,a young fan asked Crowder to pick the toughest NBA player to defend. Crowder responded Durant, which elicited loud boos from a crowd filled largely with fans in Celtics green.

Crowder smiled and said, "Yeah, I'm with you guys."

Crowder still enjoyed the experience recruiting Durant, particularly the fact that the Celtics trusted him to be part of it. He especially enjoyed getting to mingle with New England Patriots quarterback Tom Brady, who was there to help woo the ex-Thunder star.

"You'll never forget [Brady's presence]," Crowder said. "It was unexpected. They tried to keep it as a secret and surprise [Durant]. It was great just to sit back, have lunch, and talk to [Brady] about anything he wanted to open up and talk about. He asked us questions about basketball, of course. And we asked him questions about football. But it was fun to just sit down and talk to another athlete of his nature, even before the meeting, and just talk. And meet him.

"The pitch, what he talked about was the city of Boston and the fans and how [Brady] embraced it. It was great. I think Kevin needed to hear that. He wanted to hear how it was living in Boston, and Brady told him about the fans. I know [about the fans]; just like everybody knows. We told him: They're really very passionate about their club and they really want to win. If you don't do that, they let you hear it. But it's all out of passion and all out of respect of the game. They want to win; it's all about championships here."

Crowder believes that the Celtics have upgraded with the signing of Al Horford, and he believes the team will find additional pieces to make it a surefire contender in the Eastern Conference.

"I just text [Celtics president of basketball operations Danny Ainge], trying to see where everything is going," Crowder said. "After [Durant's decision], I just asked like, 'Well, what's the direction now?' And he said, 'We're still trying to make moves.' So that means we're still active. And we still have a lot of assets, we still have a lot of young players. So we gotta figure it out. We can be as aggressive as we want to. But I do feel like we're one or two pieces away still."

Crowder said of Horford: "Big Al -- I think he helps out tremendously. My guys were telling me something about [one media projection] predicted us to win 59 games. I know he's a big key to what we're trying to do. He's going to help us out a lot. And last year we won 48 games without a guy of his nature. I just think that right there, what people see, speaks volumes. He can help us out a lot. And his style of play fits right in. So it's not like we're trying to train him into something that he's not. He's going to play the same way he's been playing. And I think he's going to help us out a lot."
Related topics:
sportsespncsoklahoma city thunderklay thompsongolden state warriorsstephen curryjae crowderkevin durantkdceltsboston celticsnba
Copyright © 2022 ESPN Internet Ventures. All rights reserved.
TOP STORIES
Cooper 'more concerned' about this winter storm than the last one
Winter storm likely to hit east of I-95 hardest
Schools in Wake, Durham counties to close Friday
Contact tracers' role changes as pandemic reaches new heights
Flavor District, Triangle's largest 'ghost kitchen' to open in fall
Residents in Wilson prepare for black ice and snow
Reporter hit by car on live television, but continued reporting
Show More
Check your tires before -- and after -- the wintry weather
American Airlines flight diverted over maskless passenger
Only one monoclonal antibody treatment is effective, NIH says
Florida doubles down on anti-critical race theory legislation
LATEST: Governor says focus on vaccines, testing -- not mandates
More TOP STORIES News