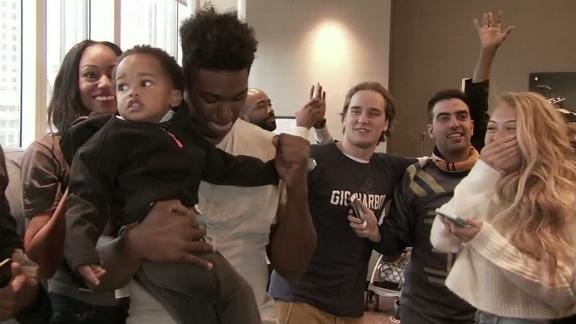 Myles Jack, the former UCLA linebacker who fell out of the NFL draft's first round Thursday amid concerns about his right knee, didn't have to wait as long Friday.

The Jacksonville Jaguars took Jack with the fifth pick of the second round (36th overall) after trading up with the Baltimore Ravens to acquire the selection. The Ravens acquired the Jags' second- (38th overall) and fifth-round (146) picks in the deal.

General manager Dave Caldwell said it was time for the Jaguars to take some risks in the fourth year of their rebuild, and he believes Jack was one worth taking.

"We want to be great. We've got to take chances," Caldwell said. "We've been pretty conservative in our time here and in our philosophy in drafting and in some of our free-agent acquisitions. There comes a point in time where we've got to close the talent gap, and you're not going to do that without taking risks. This is one that we just felt [was a] calculated risk. He's going to play out this contract, and hopefully he's here for 10, 12 years, and we'll look back at it as a good thing for the Jaguars."

Jack said it was frustrating to watch the picks fly by without hearing his name, after months of endless media speculation about his injury and its potential impact on his career.

"It's been crazy, but bottom line is, man, I'm, ready to go," Jack said. "I'll be there rookie minicamp. I'm 100 percent healthy. I'm cleared. The knee shouldn't be a concern anymore. I definitely proved that with my play. There's nothing else to talk about. I'm ready to play ball."

Jack entered the draft after his junior season at UCLA and was considered a potential top-10 pick and one of the most athletic players in this year's class. But his name wasn't called by commissioner Roger Goodell on Thursday -- Jack was one of a handful of big-name prospects remaining in the draft's green room by night's end -- as teams were reportedly scared off by the concerns about his knee.

The 6-foot-1, 245-pounder suffered a season-ending torn lateral meniscus during a Bruins' practice in September. He wasn't cleared for physical activities until March, five days before UCLA's pro day, at which Jack worked out publicly for the first time since the injury.

On Wednesday, Jack told the New York Post that the injured knee might require microfracture surgery and noted that degenerative issues are there, "but it's nothing extreme."

"Down the line, possibly, I could have microfracture surgery, potentially," he told the Post. "Who knows what will happen? Nobody knows how long anybody is going to play in this league. To play three years in this league would be above average."

A source told ESPN's Adam Schefter that Dr. James Andrews, who examined Jack in December, told the linebacker on Friday that he does not need microfracture surgery.

The Jaguars checked out Jack's knee at the NFL scouting combine, at the combine re-check and again when they worked him out two weeks before the draft. Caldwell said they put Jack through a pretty intense workout and came away impressed.

"We videoed it, and we reviewed it, and I was expecting to see him maybe favor it a little bit, maybe coming up limping, and it was really the opposite," Caldwell said. "Some of the change-of-direction drills coach [Gus] Bradley had him doing was pretty impressive.

Jack opted to stay at his hotel and not attend Day 2 of the draft Friday. He tweeted a video of him dunking a basketball earlier in the day, likely an effort to show his knee is OK.

Caldwell said he considered trading up into the first round to take Jack on Thursday night, but he didn't want to part with the fourth-round pick teams were demanding.

"The sentimental part of me, it broke my heart seeing him on the TV last night because he is such a good kid and such a dominant player that it just wasn't right," Caldwell said. "The more I thought about it overnight, and we talked. We deliberated a lot with our medical staff and with Gus and our coaching staff. It was the right move for us."

Jack will not collecton his loss of value insurance policy, which would have applied if he fell to pick No. 45.

When healthy, Jack has sideline-to-sideline range and flashes explosive power. He is the top coverage linebacker in the class, according to ESPN NFL Draft Analyst Todd McShay.

Information from ESPN's Darren Rovell was used in this report.