James Harden expects to play vs. Thunder despite ankle sprain 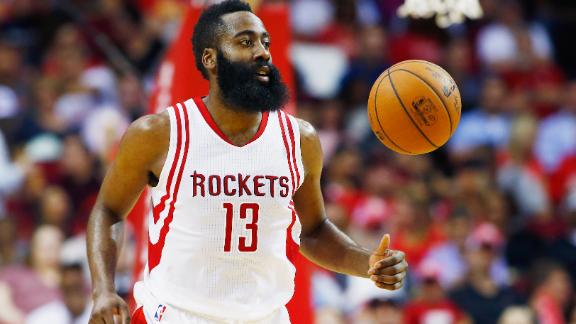 Harden, who hasn't missed a game this season, sprained his ankle in Saturday's loss at Atlanta. Harden missed Monday's practice but participated in Tuesday morning's shootaround.

"Feel better than I did yesterday," said Harden, who leads the NBA in minutes played. "Every day has been improving and getting better. I've been rehabbing and getting treatment every single day, icing it just doing the things that hopefully will put me in position to play tonight."

Harden said he's having problems cutting, something he does a lot given the position he plays. But he hopes his pregame routine will give him more confidence he can perform.

"He looked good," interim coach J.B. Bickerstaff said. "Unless something crazy happens between now and game time, he should be ready to go."

With 12 games remaining in the regular season and the Rockets fighting to maintain their playoff position, Harden said every game is vital.

The Rockets (35-35) enter Tuesday's game tied with the Dallas Mavericks (35-35) for the final two playoff spots in the Western Conference.

After their matchup with the Thunder, the Rockets return home Wednesday for a game against the Utah Jazz (34-36), who are ninth in the West standings and trail Houston by one game. The Rockets also are only a half game behind the Portland Trail Blazers for sixth in the West.

"It's tough -- we need every single game and from here on out. It counts," Harden said. "We'll get some more rest and more treatment this afternoon and see how it feels."