Jared Cook: 'Why not be the voice?' 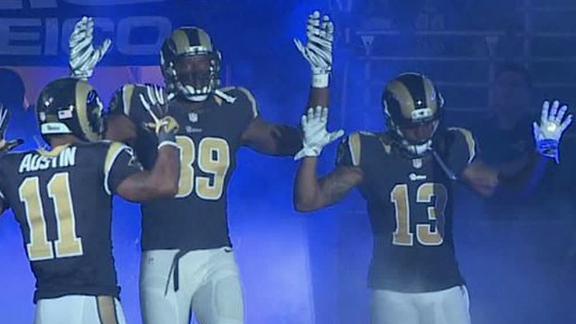 EARTH CITY, Mo. -- St. Louis Rams tight end Jared Cook has no regrets about the "Hands up, don't shoot" gesture that he and four teammates made during pregame introductions Sunday.

Given three more days to consider the fallout, Cook said Wednesday that he and teammates Stedman Bailey, Tavon Austin, Chris Givens and Kenny Britt could have done things differently, but they don't apologize for it because of the way it was intended.

After Sunday's 52-0 win over the Oakland Raiders, Cook and his teammates attempted to make it clear that they did not make the gesture in support of the violence taking place in nearby Ferguson, but Cook believes the message was lost in translation considering what has happened since.

"It's about building young men. Think about it; what real role models do we have nowadays? Young men are looking around for guidance and looking for people to look up to, and they have none. So why not be the voice and start here in the community when something so serious is going on 8 miles up the road?"

On Sunday night, St. Louis Police Officers Association business manager Jeff Roorda released a statement asking for the Rams and the NFL to deliver a "very public" apology and for the five players to be disciplined.

That paled in comparison to the response Cook and his teammates got on social media. Cook said he received threats of violence through various social media platforms, including Facebook, although he said it was difficult to decipher what's real and what's not through a computer.

Rams coach Jeff Fisher sat down with Cook and his teammates and discussed the matter Wednesday morning and, according to Cook, talked about the perception of it from some angry members of the Rams' fan base.

Cook said he has been made aware of Rams fans threatening to stop supporting the team because of the gesture.

"I understand that," Cook said. "They have to understand that we are ambassadors for them as well as other parts of St. Louis. As Rams and as the NFL, what we do is we represent everybody. We bring people together for a common goal.

"How could you not want to have fun and enjoy that? For me, it's sad, but at the same time, we have got four games left. There are many opportunities for us to make this into a positive thing and not be a negative thing. But for the Rams fans out there that want to give up their [personal seat licenses], I wouldn't do that just yet."

Cook said he and his teammates have received plenty of positive feedback as well. One such vote of support came from the Ethical Society of Police, a union of black police officers in St. Louis, which released a statement Wednesday.

"We think that their actions were commendable and that they should not be ridiculed, disciplined or punished for taking a stand on this very important issue which is of great concern around the world and especially in the community where these players work," the statement read, in part.

Asked about the statement, Cook got a bit emotional.

"That's pretty amazing," Cook said. "That shows a lot of character, and it shows a lot of maturity. That shows that for guys like that to come out and issue a statement, those are people you can work with and those are people that you can make your community better with. It's not about fighting each other. It's not about wrong and right. It's about treating people with respect. You can operate with respect without having to come at somebody in a negative way. Like I said before, you can agree to disagree on a situation and just walk away, let it be done."

Cook also said he and the rest of the Rams are planning ways to get into Ferguson and help on the ground. Families from the area will be invited to a holiday party Dec. 20 where children in need will receive gifts from their secret Santas. A coat drive for kids in need in Ferguson also is in the works.

As for any further gestures, Cook said he hopes the message is now clear.

"We have not been asked to not make the gesture again," Cook said. "Will we make it again? I think we kind of got our point across. Especially now I think the world kind of understands a little more why we did it."