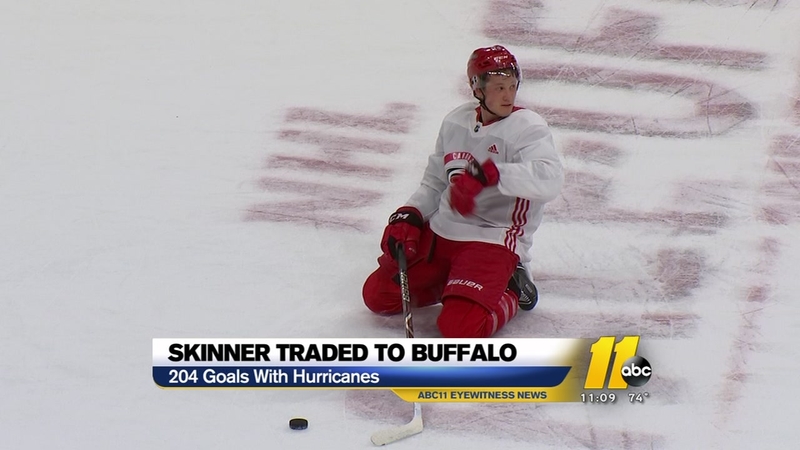 RALEIGH (WTVD) -- It turns out something can be totally expected and still be stunning in the moment. Jeff Skinner is no longer a Hurricane.

That news came down shortly after 6 p.m. on Thursday.

Everyone knew the Canes were feverishly shopping Skinner this summer, but with no deal completed, I was starting to think he'd get a shot under Rod Brind'Amour to prove that he could play the kind of hockey that keeps a coach happy.

For Brindy, the thought was that he would be able to pull out the sense of defensive responsibility that has so far eluded Jeff in his career.

That's the maddening thing. Skinner was obviously gifted with a special knack for pumping the puck into the back of the net.

What he could never do adequately, in the eyes of his coaches anyway, was dedicate the same effort to preventing the other team from doing the same.

I was one of many who constantly lamented him being placed on the second and third line with sub-standard talents, a tactic that seemed to be smothering his skills. Accountability is a classic NHL buzzword though, and Skinner never seemed to have enough of it here.

He burst onto the Raleigh scene like a rocket back in 2010 as the seventh overall pick.

Impossibly baby-faced, with a matching cute figure skating story to tell, he was the darling of the league. No prom date was coveted more in Raleigh at the time. He made the All-Star game and Skinner merch was flying off the shelves. The world was at his feet.

Back when everything seemed possible. Instead, I got fatter and he got traded. pic.twitter.com/2TiSvpiuQP

I did a feature story with him at the time, on the eve of the All-Star game in Raleigh.

There was so much demand for him that I had to meet him at the airport and sneak for 20 minutes in a conference room to get my interview. That whole weekend was filled with incredible optimism, not just about Skinner, but about the Canes and hockey in general in Raleigh. The whole thing was a raging success.

Throwback: My sitdown with rookie Jeff Skinner on the eve of the 2011 All-Star game. Because of the demand at the time - I had to meet him in an airport conference room: pic.twitter.com/GrMOBvVa4V

From there, unfathomably, it all went south. Skinner turned petulant on the ice in year two and then the concussions started happening. For a good time, the concern was about whether he could continue playing, but not at the level he'd reached as a rookie.

Skinner ultimately became a totem of the team's failures. He and so many others mired in a hamster wheel of mediocrity.

The trade return today was certainly underwhelming. No NHL players returned for a three-time 30 goal scorer. Just a prospect named Cliff Pu and a trio of draft picks. He may turn into something, and the picks may become valuable, but there's nothing there with anything approaching the certainty of Skinner's talent.

It's a testament to both the tight spot the Canes were in as well as Skinner's reputation around the league I'd suspect. Everyone knew he wanted out of Carolina, but everyone also knew of his skills and shortcomings. A premium price was never going to be fetched.

The Canes will tell you the young forwards bubbling up in the system are ready to handle some of the scoring mantle left behind. That may wind up being true. It's just a shame we'll always be left wondering what might've been with Jeff Skinner.