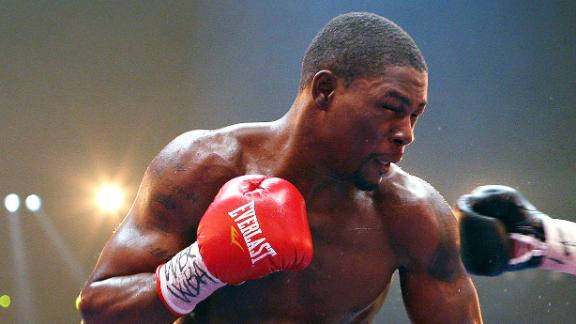 Taylor appeared via video from the Pulaski County jail for his initial court appearance Wednesday. A not-guilty plea was entered on his behalf. Taylor faces preliminary charges of domestic battery and aggravated assault in the late Tuesday shooting of Tyrone Hinton.

Taylor didn't speak when he left the jail accompanied by a bail bondsman. His attorney, Allison Allred of North Little Rock, didn't immediately return an Associated Press call for comment.

District Judge Wayne Gruber also granted a defense request for Taylor to travel out of state to train and compete in a bout against Sam Soliman in October.

Taylor was arrested Tuesday night at his home in Maumelle, Arkansas.

Hinton was in serious condition at a hospital after being shot multiple times, Minden said.

Minden said the police responded to a 911 call from Taylor's wife, Erica, at around 7 p.m. ET.

"Mr. Taylor's cousin and another individual came to his residence, and there was some sort of altercation," Minden said, adding that the two who showed up at Taylor's home were unarmed. "At some point, Mr. Taylor retrieved a handgun and fired several rounds. His cousin was struck multiple times. The cousin is alive and in serious condition at an area hospital. He has pretty serious injuries. The other person was not struck, but Mr. Taylor had fired several rounds and missed."

Minden said that when police arrived at Taylor's residence, he was "very cooperative with our investigators. He was very calm, and there were absolutely no difficulties."

Minden said police were investigating what led to the shooting.

The incident comes just two weeks after Taylor (32-4-1, 20 KOs), 36, finalized a deal for an unexpected shot at world titleholder Soliman of Australia.

The fight is scheduled to headline an ESPN2 boxing special Oct. 8 at the Beau Rivage Resort & Casino in Biloxi, Mississippi.

"ESPN had committed to carry the fight and was working towards a contractual agreement. We are now reviewing the situation and will make a decision once more details emerge," an ESPN spokesman said in a statement.

Taylor, a 2000 U.S. Olympic bronze medalist, was middleweight world champion from 2005 to '07. He won the title by outpointing Bernard Hopkins, ending his record-setting title run at 160 pounds, and then beat him again in an immediate rematch.

Taylor made four successful defenses before getting knocked out by Kelly Pavlik in the seventh round of a dramatic fight.

In 2009, Taylor suffered a small brain bleed as a result of a brutal 12th-round knockout loss to Arthur Abraham in a super middleweight fight that was part of the Super Six World Boxing Classic.

After the injury, Taylor dropped out of the round-robin tournament and took off 26 months. But after going through extensive neurological testing, Taylor secured a boxing license in Nevada.

He returned to the middleweight division, reunited with original trainer Pat Burns, who had led him to the title, and has won four fights in a row, including three by knockout, since launching his comeback in December 2011.

The 40-year-old Soliman (44-11, 18 KOs) won the belt by outpointing Felix Sturm in Germany in May and got a lucrative offer to make his first defense against Taylor.