Jerry Jones on Sam: 'In a good place' 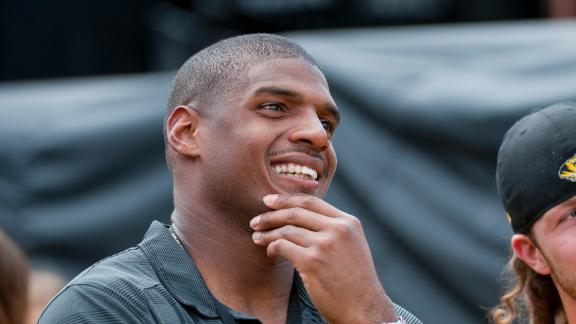 The Cowboys signed Sam, the first openly gay NFL player, on Wednesday, days after the seventh-round pick was released by the St. Louis Rams.

"He's a pass-rusher," Jones said Friday on 105.3 The Fan. "He has a lot to go when he comes to working in space or a lot to go when it comes to special teams. It's hard to be just a situational pass-rusher if you can't be a special-teams player, so he's got a long way to go. He's in a good place.

"As [coach Jason Garrett] said, the first thing for practice-squad guys is by its very name, it gives you practice. It allows you to practice better. That will be his primary responsibility, and he'll get to be able to work and refine his skills. But it's no secret we need pass-rushers, and we need some defensive linemen."

Sam had three sacks for the Rams during the preseason but didn't survive the cuts to a 53-man roster because of the team's depth on the defensive line. The Cowboys have a desperate need for pass-rushers after releasing franchise sacks leader DeMarcus Ware in a cost-cutting move in the spring and placing second-round pick DeMarcus Lawrence on the injured reserve/designated to return list because of a broken foot.

Sam was the SEC co-defensive player of the year at Missouri last season, when he had 11.5 sacks. However, his draft stock dropped after an unimpressive showing at the NFL scouting combine, when he clocked a 4.91-second 40-yard dash and didn't fare well on the tests that measure explosiveness.

"I hope people question my speed, so on game day they see me running fast and they're like, 'Oh, man, I was wrong about that guy,'" Sam said Wednesday.

Jones noted that there were also concerns about Suggs' relatively slow 40 times when the Ravens selected him with the 10th overall pick of the 2003 draft. Suggs has 94.5 career sacks and has been selected to six Pro Bowls.

"Slow was a big item, and of course, he's turned out to be one of the greatest pass-rushers the league has ever seen," Jones said. "He has a knack, Suggs. These pass-rushers have a knack. Charles Haley, he had a heck of a knack. He did it not only mentally but he did it with head-butting. He did it in a lot of ways. He was brilliant at it. Seriously. Without exaggeration. But he was a pass-rusher. You had to work around him on the run defense, but he was a great player. He made the difference on every team he played on. That's why he owns five Super Bowl rings.

"In this league, if someone has a knack no matter if they don't have the measurables or what have you, and they can cause the passer to not only get him down but hurry him up, then they're valuable. And that's what we're looking for."