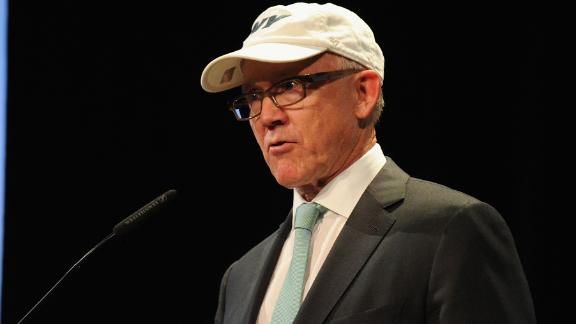 Tampering charges against the New York Jets have been filed over comments that team owner Woody Johnson made last month about New England Patriots cornerback Darrelle Revis, and the NFL is looking into the matter, an NFL official told ESPN.

The league is trying to determine whether there was a violation and, if there was, how severe of a fine should be levied against Johnson and the Jets.

At a news conference to discuss the firing of coach Rex Ryan and general manager John Idzik, Johnson openly praised Revis and added, "I'd love for Darrelle to come back."

Later that day, Johnson issued a mea culpa, saying he "misspoke" when he made his comments. He also said he called Patriots owner Robert Kraft to "emphasize those points."

"I misspoke today when I commented on Darrelle Revis," Johnson said. "I would never interfere in the contractual relationship of a player with another team and should not have used those words."

The NFL's tampering policy says, "Any public or private statement of interest, qualified or unqualified, in another club's player to that player's agent or representative, or to a member of the news media, is a violation of the Anti-Tampering Policy."

Revis' contract has an option for 2015 valued at $20 million, which the Patriots are likely to decline, which would make him an unrestricted free agent and would allow the Jets to speak to him legally.