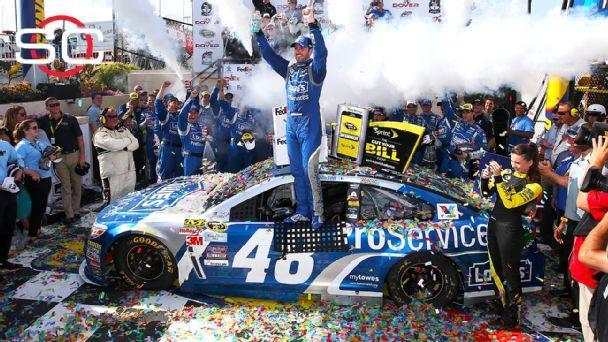 DOVER, Del. -- Jimmie Johnson took the congratulatory call from his boss, then flipped the phone for a selfie.

The six-time series champ and crew chief Chad Knaus sandwiched the 60-pound trophy and smiled for a familiar photo.

"You've only got 10 of 'em," a fan yelled at the victory lane celebration.

Johnson had already mastered the Monster Mile like no other driver. His latest win earned him a slice of NASCAR history that etched his name in the same class as five Hall of Fame drivers.

With his No. 48 Chevrolet on cold tires, Johnson got hot down the stretch Sunday to win at Dover International Speedway and become the fifth driver with 10 or more Sprint Cup victories at a single track.

"It was cool to have a track that I enjoyed so much turn into a track I could win at," Johnson said. "We've been able to keep that feeling going for a lot of years."

Unlike his other nine Dover wins when he led at least 175 laps in each race, Johnson led only 23 laps for this perfect 10. Johnson has 10 wins in 27 career starts on the concrete mile track. He needed five extra laps beyond the scheduled 400 because a late accident brought out the caution.

He has four wins this season, 74 in his career and has won at least four times in a season 11 times.

On deck, Johnson could catch Dale Earnhardt for seventh on the career wins list with 76.

"It's right there in front of me, so I look at it and think, wow, this is incredible," Johnson said. "Yes, it's a priority for me and something I want to do. But I'm almost in shock that we're there. Seventy-four race wins, 10 here, you can't dream that big."

"I know what I'm capable of and felt just fine doing it," Johnson said. "And, I've got a great rhythm. I've got great support at home."

No active driver owns a track like Johnson does Dover.

"I figured it would be tough to have a shot at Jimmie," Larson said.

Harvick held a comfortable lead until the field was bunched on a late caution. Kyle Busch, who was in the top five, connected with Brian Scott to end the race for each driver. Busch, who poked his head inside Scott's window for a chat, was unhurt in his second points race since he suffered leg and ankle injuries at Daytona.

Busch needs a win and to hit the top 30 in the points standings to become eligible for the Chase for the Sprint Cup championship.

Harvick and Johnson both stayed out on cold tires during cautions. Knaus gambled that the No. 48 Chevrolet was as stout on four cold tires as others would be on two or four fresh ones.

He was right. Johnson never lost control, even with two more cautions, including one that that came afterClint Bowyer, Denny Hamlin and Kurt Busch all tangled on the track. Casey Mears wrecked to bring out the final caution with three laps remaining.

"I was trying to be smart with my line and I guess guys on two tires weren't all that fast," Johnson said. "The No. 4 (Harvick) and I did just fine on old tires and held those guys off."

Martin Truex Jr.led the most laps (131) for the third straight race, yet failed again to win. He was sixth.

Tony Stewart finished two laps down in 26th at the track where he last won a Cup race on June 2, 2013.

Stewart's pit crew hustled to recover chunks of concrete in his stall. This was the second straight year there were broken slabs of concrete during the race. The race last June was stopped 160 laps into the race after Ryan Newman's car knocked up hunks of concrete from the track.

Earnhardt was among a small group of drivers that included Hamlin and Harvick who met with NASCAR officials on Saturday night to discuss issues in the sport, including safety.

"We talked about a lot of things, things that will hopefully make our sport better, our cars better, make them a better show for the fans," Hamlin said. "I think all that stuff being said, it's a process, it takes time and hopefully we get this deal better."

"I don't think I was invited to that meeting," he said, smiling. "Haven't won enough races or championships."

After the race, NASCAR summoned Trevor Bayne to the hauler to speak to officials. NASCAR Sprint Cup Series Director Richard Buck said that Bayne got out of his car before safety personnel arrived. Drivers are supposed to remain in their cars until safety personnel get there unless there is a fire, smoke in the cockpit or another extenuating circumstance.

Buck said NASCAR will determine early this week if it will penalize Bayne for violating the rule, implemented in response to the Tony Stewart-Kevin Ward Jr. tragedy last August where Ward got out of his sprint car, approached Stewart's car and was struck and killed by Stewart in a non-NASCAR race at Canandaigua (N.Y.) Motorsports Park.

Information from ESPN.com's Bob Pockrass and The Associated Press was used in this report. 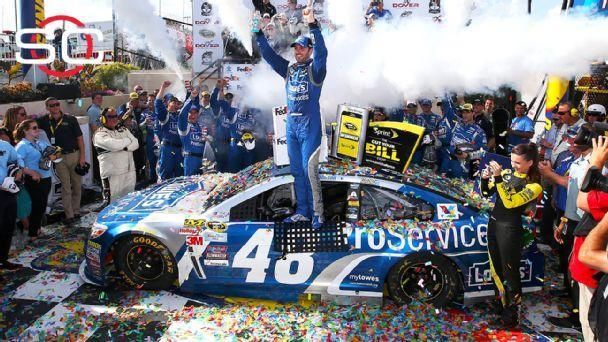 Johnson captures 10th career Dover win
SportsCenter Highlight of the Night: Jimmie Johnson wins after a green-white-checkered finish at Dover to become the fifth NASCAR driver with 10 or more Sprint Cup victories at a single track.