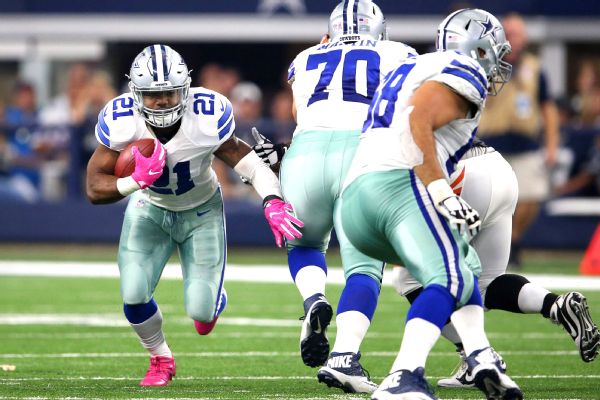 OWINGS MILLS, Md. -- Ravens quarterback Joe Flacco and Cowboys running back Ezekiel Elliott both have given unique gifts to their offensive linemen this holiday season.

Flacco gave all 14 offensive linemen on the Ravens a virtual reality system on Friday, two days before Christmas. While Flacco wouldn't divulge how much he spent, the conservative estimate is $42,000.

"It's just Christmas," Flacco said before being interrupted by guard John Urschel.

"It's awesome," Urschel happily chimed in.

Each Cowboys offensive lineman received a John Deere utility terrain vehicle from Elliott, who also drove one of the vehicles around the team's complex Friday.

Flacco joked that he hoped his offensive linemen would show their gratitude by not allowing a sack in the Ravens' game Sunday against the rival Pittsburgh Steelers.

"Yeah, maybe for one game," Flacco said with a smile. "That would be nice."

The Ravens' offensive linemen -- nine on the active roster, two on injured reserve and three on the practice squad -- came out of their meetings to find Oculus Rift and Alienware systems in front of their lockers. They generally sell for $3,000 each.

On each one, there was a note that read: "Merry Christmas, From Joe."

"I didn't even know this really existed," right tackle Rick Wagner said. "I just want to see if I can turn it on."

Cowboys veteran tight end Jason Witten said Elliott's gesture "shows a lot about what this team is all about."

"Great to see the young pup doing that," Witten said. "I think I've been hearing about it for a couple weeks. I know he's been excited."

Cowboys star wide receiver Dez Bryant said he also wants one of the UTV's from Elliott.

"I already told him to hook me up," Bryant said. "I told him when we was in the weight room, I said, 'Hey, man, give me a sweet deal and watch how I customize it. I'm going to show you.'"

Flacco has always bought Christmas gifts for his linemen. In the past, he's given them a variety of gifts, including expensive watches and gift cards.

"Every year, you got to try to do something that's a little different," Flacco said. "It's actually a lot of pressure. I try to get it out of the way earlier and earlier every year just to make sure it's taken care of and that way I can get it off my mind and not think about it anymore."

"He's a big mathematician guy," Urschel said. "I looked up for sweet chalk for his chalkboard."

Flacco's offensive linemen have helped him in one of his most productive seasons. He is 212 yards passing away from his first 4,000-yard season. Flacco has been sacked 28 times this year, which is the most since 2013.

"You shouldn't expect it and Joe doesn't have to do it," Pro Bowl guard Marshal Yanda said. "But it's nice of him to do it. We really appreciate it."

ESPN's Todd Archer and Darren Rovell contributed to this report.