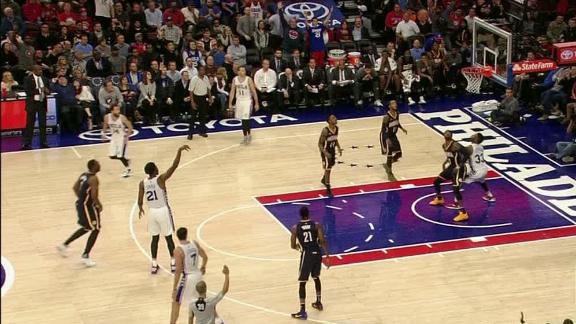 PHILADELPHIA -- Joel Embiid wanted the ball down the stretch and the 76ers were happy to give it to him.

Embiid scored 16 of his 25 points in the fourth quarter and overtime to lead Philadelphia to its first victory of the season, 109-105 over the Indiana Pacers on Friday night.

Ersan Ilyasova added 14 points for Philadelphia, which was the last winless team in the NBA. The 76ers snapped a 44-game losing streak in October and November that dated to Nov. 22, 2013.

And they can thank Embiid, the No. 3 pick of the 2014 draft who missed the last two seasons due to a broken foot but has returned as a leading Rookie of the Year candidate.

"I want to be the best player and every time I step on the court, I think I'm the best player," Embiid said. "And if the team needs me to do that kind of stuff -- I think I've still got a long way to go -- but I can do those types of things."

"Joel brought us home with some individual brute strength," Philadelphia coach Brett Brown said. "He came in and won the game for us. Joel was the focal point at the end."

Paul George had 26 points and Monta Ellis added 19 for the Pacers.

After scoring nine points over a 2 1/2-minute stretch late in regulation, Embiid put the Sixers in front for good with a three-point play with 55 seconds left in overtime that made it 107-105. The Pacers turned it over on their ensuing possession and Embiid then came up big again, corralling a loose ball after he missed a jumper and then making a pair of free throws with 8.6 seconds left to put Philadelphia up four.

"It just feels good to finally get the chance to close a game out, which we haven't been doing," Embiid said. "Getting a chance to make shots in the clutch is a learning process for me and you've got to trust it."

The teams completed a home-and-home after the Pacers won 122-115 in overtime in Indiana on Wednesday night. Jeff Teague had 30 points and nine assists, and George had 28 points and eight rebounds on Wednesday.

"We executed in our last game down the stretch; they executed tonight," Pacers coach Nate McMillan said. "Our offense wasn't sharp down the stretch. The things we need to do to win a ballgame, we didn't do."

Embiid didn't play on Wednesday as he eases back into action.

"He's a big man and made plays down the stretch," McMillan said.

The Sixers looked like they were going to lose yet another November game after blowing five-point lead with 25.4 seconds left in regulation.

But the 76ers couldn't hold on.

Ellis converted a three-point play with 22 seconds left. After Philadelphia coach Brett Brown called timeout, Teague stripped Sergio Rodriguez to give the Pacers possession. George was fouled and made a pair of free throws to tie it at 100 with 2.8 seconds left.

Philadelphia's Jahlil Okafor, who had offseason knee surgery, wasn't scheduled to play on Friday night in order to rest for Saturday's game at Atlanta. But Okafor was called into action in the first half and went scoreless in two minutes.

The 76ers ended a six-game losing streak to the Pacers. Indiana still has won 10 of the last 12 against Philadelphia.

76ers: A day after visiting the 76ers at practice, Hall of Famer Allen Iverson was in attendance. ... Philadelphia Eagles running back Darren Sproles was seated in the first row under the basket.

76ers: At Atlanta on Saturday night