Joel Embiid works out for Cavs 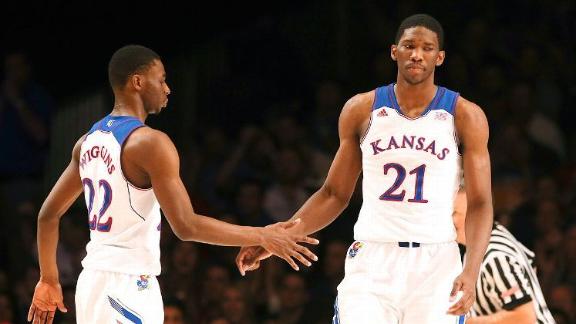 CLEVELAND -- As they search for a new coach, the Cavaliers are taking a close look at an intriguing player.

Former Kansas center Joel Embiid worked out Wednesday for the Cavs, who are trying to decide what to do with the No. 1 overall pick in this month's NBA draft.

The 7-foot Embiid, who has only been playing basketball for a few years, arrived in Cleveland on Tuesday night for his visit, the Cavs confirmed. The Cavs are eager to put Embiid through a thorough physical exam as there have been concerns about the 18-year-old's back.
Embiid tweeted about the visit on his Twitter account:

- Joel-Hans Embiid (@JoelEmbiid) June 11, 2014Embiid missed the tail end of his freshman season with the Jayhawks because of what was described as a stress fracture in his lower back. Embiid did not attend the league's pre-draft combine last month in Chicago, and his medical records were not released by the school. The Cavs don't want to take any chances with a selection after last year's top pick, forward Anthony Bennett, struggled during his first season after undergoing shoulder surgery.

Embiid, who averaged 11.2 points, 8.1 rebounds and 2.6 blocks this past season, missed the Big 12 tournament and the NCAA tournament due to the back injury. However, he did participate in a 1-on-0 workout for NBA teams in Santa Monica, California, in late May.

Embiid began playing basketball only three years ago in his native Cameroon.

The Cavs won the draft lottery and have the first pick for the second year in a row. They'll likely use the selection on Embiid, Kansas swingman Andrew Wiggins or Duke forward Jabari Parker.

"The next day will be huge for him [Embiid] and whether he'll go No. 1," one source told ESPN.

Wiggins will work out for the Milwaukee Bucks, who hold the No. 2 overall pick, Friday in Santa Barbara, California, a source told ESPN. The Philadelphia 76ers will pick third.

Jeff Goodman of ESPN.com and The Associated Press contributed to this report.