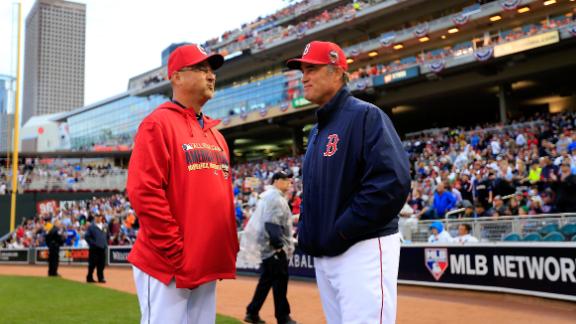 BOSTON -- Cleveland Indians manager Terry Francona, who has been friends with John Farrell since they were teammates on a "bad" Cleveland team in 1988, said he plans to accompany the Red Sox manager to the hospital Tuesday when Farrell begins his first cycle of chemotherapy.

Farrell, who announced Friday that he had been diagnosed with Stage 1 lymphoma and would not manage the rest of the season while he undergoes treatment, is scheduled for three 21-day cycles of chemotherapy at Massachusetts General Hospital, where his care will be overseen by Dr. Larry Ronan, the Red Sox's medical director. In each cycle, Farrell will receive chemotherapy for five days; the last week of each cycle is built in for recovery.

Francona is in Boston to manage the Indians as they open a three-game series against the Red Sox on Monday. Farrell was in the Red Sox clubhouse before Monday's game.

"We were just talking," Francona said of his offer to accompany Farrell. "I was just asking questions, the normal questions. He mentioned he was starting Tuesday. I said, 'I'm right there. I'll go with you, whatever.' I may not do anything other than get in the way, like normal, but being a friend, the only thing I know how to do is be a friend. Like the rest of us, we don't know exactly what to do, but I do know how to be a friend. I care about him a lot. That's what I'm trying to do."

Francona was a 29-year-old part-time designated hitter on the 1988 Indians, who finished sixth in the American League East. Farrell, 25 at the time, was in his first full season with the Indians and won 14 games while taking a regular turn in the rotation.

"That team probably too much resembled 'Major League,' the movie," Francona said. "We were bad. That team had five future managers, but I don't think any of us thought that was in our future."

Francona and Farrell would later work together in the Indians' front office, and when Francona managed the Red Sox, he hired Farrell in 2007 to be the pitching coach, a position he held for four seasons.

Farrell's lymphoma was discovered when he went in for surgery to repair a hernia on Aug. 10 in Detroit.

"I was worried about him because of the hernia," Francona said. "All of a sudden, you get the unexpected news of something more serious. Kind of unsettles you a little bit. I don't know if well wishes and lots of people caring, [but] if that has anything to do with the outcome, he's going to be in good shape. Because there are a lot of people who care about him, myself included."

Francona and the Indians have been touched by cancer already this season. The 4-year-old daughter of infielder Mike Aviles, who played for the Red Sox in 2011 and 2012, has been undergoing treatment for leukemia.

Asked how the illnesses of a child of one of his players and his close friend affect his perspective, Francona said: "I know I've said 'I don't know' four times, but I don't know. I think like a lot of us. You just do the best you can. I think right now I'm supposed to be a friend."