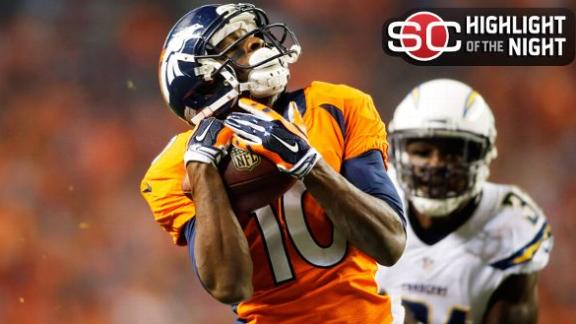 Following the Broncos' 35-21 victory over the San Diego Chargers, Manning was critical of some of the in-game entertainment. In one sequence, just after the two-minute warning, the Broncos were called for a false start penalty on right tackle Paul Cornick that Manning blamed squarely on the video boards' technical crew for creating a distraction for the offense.

"I got a problem with our scoreboard operator; I've got to have a little talk with him,'' Manning said after the game. "I'm not sure what he's doing. He's playing music and showing players dancing, getting the crowd fired up and we have the ball. I don't think we should be doing that.''

Manning also referenced a sequence from earlier in the second half, when Chargers quarterback Philip Rivers was shown on the giant video board as the crowd booed and then Manning would be shown to cheers as the images went back and forth several times to alternating boos and cheers.

"And I don't think we should be showing their quarterback on the sideline,'' Manning said. "I thought that was kind of disrespectful . . . our scoreboard operator, it wasn't his best night.''

On Friday, Fox said there was nothing malicious at work.

"There is a lot of stuff that goes on at one of these games,'' he said. "There are a lot of people that work really hard to make sure that our great fans are entertained. Obviously people like when you win.

"There are a lot of people that have a lot of responsibilities for each one of these things. And look, you're never perfect. I'm never perfect. Our product sometimes comes under attack, and rightfully so. But all in all, it's about the fans, [that] they have a great experience.

"You're going to make mistakes and that happens. We've moved on. We had a real big win, a nice big spotlight, and now we're on to New England.''

Fox then was asked if it was a "serious'' issue.

"I think you take everything seriously, but at the end of the day, it's not going to be perfect,'' Fox said. "There are people working really hard. We're all trying to do what's best for the organization and sometimes it's not perfect. That's the way of life.''