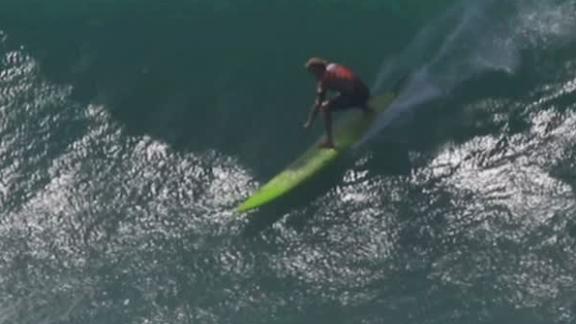 ESPN
HALEIWA, Hawaii -- There are two sayings that come along with the Eddie Aikau big-wave surfing invitational: "The bay calls the day" and "Eddie would go."

For the first time in six years, the bay -- and event organizers -- gave the nod Thursday as a powerful and sustained swell produced huge surf on Oahu's North Shore. Eddie, a famed lifeguard and big-wave surfer who once protected these shores, most certainly would have gone.

Before the sun came up over the horseshoe-shaped Waimea Bay, organizers huddled together to make the final call on the event, which has only run nine times in its 31-year history.

Eddie Aikua's brother, Clyde, announced to a large crowd early Thursday morning that his brother's namesake surfing contest was on.

"I've been riding Waimea Bay for over 40 years, and today has to be one of the best days I've ever seen," Aikau said. "It is a go!" he added as the crowd came alive with whistles, cheers and applause.

They got what they hoped for as huge sets of monster waves crashed onto the outer reef of the bay, producing some waves that organizers estimate were 60 feet tall.

Clyde Aikau is the only competitor to surf in all eight previous competitions and is the oldest at 66 to compete in this year's event. Thursday will be his last time surfing in the contest, he said.

Clyde said the event isn't really about competition, fame or money. It's about honoring his brother's legacy of helping others and his passion for the ocean. "We are humbled and privileged," he said.

Navarro is a "very unassuming, a very humble character," Wilmott said. "He has a higher vision."

In 2009, when Navarro was invited to his first Eddie competition, he awed the crowd when he rode the biggest wave of the day, scoring a perfect 100 on the monster breaker that towered over him.

"Eddie was a higher-vision guy, too," Wilmott said. "He had loftier goals for humanity, and he understood the power of relationships. That is just the spirit Ramon has tapped into."

Navarro came to the North Shore and worked his way into the surfing community by building mud brick ovens and selling empanadas to beachgoers, Wilmott said.

Navarro surfed in the first heat of the morning on Thursday, and despite only catching one wave out of a possible four, earning him a mere five points out of 100, Navarro said he was just happy to be involved in the event.

"This is my dream," Navarro said after drying off from his hour-long session. "I can die happy now."

Looking forward to his second heat of the day, Navarro said he hoped that Eddie would "look at (him) and send (him) some good waves."

"I'm going to try my best and enjoy it, I'm just happy to be here," he added.

The competition began in 1984, six years after Eddie Aikau died.

As a lifeguard, Eddie Aikau is said to have never had a fatality while on duty. When the surf was too big for most in Waimea Bay and the crowds cleared out, Aikau would grab his surfboard and take on the biggest waves around.

Ultimately, however, Aikau gave his life to the ocean in a final attempt to save others. The 31-year-old Aikau was part of a team that was attempting to trace the route of their Polynesian ancestors from Hawaii to Tahiti aboard the traditional Hokulea canoe in 1978.

The vessel encountered rough seas and capsized. Aikau took his surfboard and paddled away for help. He was never seen again, though the rest of the crew was eventually rescued. 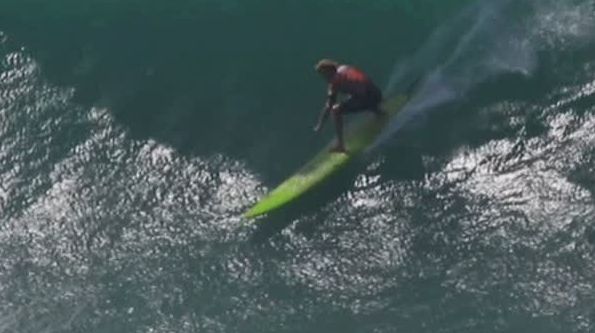