Johnny Manziel apologizes to A&M fans on Twitter, vows he'll 'be back' 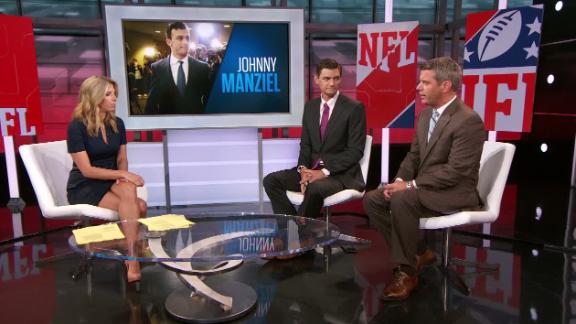 Johnny Manziel is pledging to salvage something positive from his turbulent NFL career, telling his fans and followers on social media to mark his words that he will "be back".

The Heisman Trophy winner and former Texas A&M star, whose rise and fall has long been dominated by headlines for his off-field partying, took to Twitter Monday to ask Aggies fans for forgiveness and express his love and devotion to the school.

The 23-year-old Manziel was replying after being tagged in a tweet by an A&M blog featuring video of his touchdown run against UTEP in 2013.

Manziel also posted a message on Instagram later Monday, assuring fans that his playing career isn't over yet and he can come back.

The Cleveland Browns selected the player dubbed "Johnny Football" in 2014, but he struggled on the field and was dropped this year.

Since the 2015 season ended, two agents have cut ties with Manziel after demanding he get a second round of treatment for drug and alcohol use. He faces a misdemeanor assault charge that carries a penalty of up to a year in jail and a $4,000 fine after he was accused of hitting and threatening former girlfriend Colleen Crowley during a night out in January. He also faces potential punishment from the NFL under tougher standards regarding domestic violence cases adopted in 2014 following former Baltimore running back Ray Rice's domestic violence case. However, he is not currently with an NFL team, and therefore not subject to league policies.

The free agent quarterback also was suspended for the first four games of next season for what a source told ESPN was aviolation of the NFL's substance-abuse policy. The suspension announced last month is not related to the league's domestic violence policy.

As the domestic-assault case has played out, the 2012 Heisman winner has been photographed partying from Hollywood to Las Vegas to New York in recent months, and his own family has expressed concern about his well-being after he was cut by the Browns this year following two underwhelming seasons.
Related topics:
sportsespnrehabjohnny footballjohnny manzieltexas a m aggiesapology
Copyright © 2022 ESPN Internet Ventures. All rights reserved.
TOP STORIES
Hickory man drowns in Oak Island
Travel trouble with flights, gas prices continues this 4th of July
Investigation underway after woman shot in Raleigh
More than 200 soldiers return to Fort Bragg after deployment
ABC11 to present Raleigh's July 4th fireworks show at Dix Park
Hospital admissions more than triple around July 4th holiday
Fourth of July 2022 will cost families more this year
Show More
6 people including 2 children shot on violent night in Clinton
Officers warn boaters of risk of driving impaired this holiday weekend
'Ghost genes' from coyotes could help save red wolves, study says
Jayland Walker was unarmed when 8 Ohio officers opened fire on him
Liz Cheney believes prosecuting Trump for Jan. 6 is necessary
More TOP STORIES News