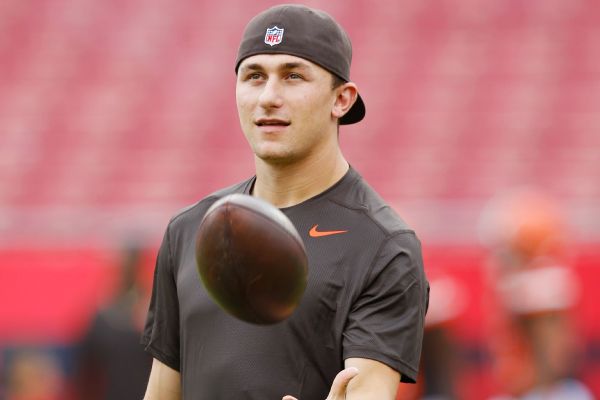 DALLAS -- Johnny Manziel has a dismissal agreement with prosecutors that will require the Heisman Trophy-winning quarterback to meet conditions for a year before being cleared of a domestic violence charge against him.

The former Cleveland Browns player will be required to complete an anger management class, attend a domestic violence impact panel and participate in the NFL's substance-abuse program or something similar.

Manziel, who will turn 24 on Tuesday, faced a misdemeanor charge that carried a penalty of up to a year in jail and a $4,000 fine. He was accused of hitting and threatening former girlfriend Colleen Crowley during a night out in January.

As with previous court orders, Manziel will not be allowed to have contact with Crowley under the agreement.

"If the undersigned defendant fails to meet one of the requirements of this agreement or is charged with a new offense, the defendant will be prosecuted for this offense," the agreement states.

Prosecutors said the agreement with Manziel -- a former Texas A&M star -- was far from the end of its process.

"A conditional dismissal is only the beginning of the process of educating an individual on how to make better choices when facing conflict," prosecutors said. "It is an important first step for a defendant. Success or failure will depend upon one's commitment to the treatment programs included."

Judge Roberto Canas said at a hearing last month that the sides had reached a tentative deal. Canas had required Manziel to attend a hearing to finalize the agreement, but it was postponed Thursday so court personnel could attend the funeral of a bailiff.

Manziel, a free agent who hasn't signed with a team since the Browns released him in March, served a four-game suspension this season for violating the NFL's substance-abuse policy. He remains under review of the league's domestic policy, which could include a six-game suspension under guidelines that were toughened after the NFL was criticized for its handling of Ray Rice's domestic case.

Manziel's agreement is similar to one that Dallas Cowboys receiver Dez Bryant successfully completed following a domestic incident involving his mother in 2012.

"I'm thankful to both the court and prosecutor for their hard work and diligence in trying to come to a fair and just resolution for all parties involved," Manziel's lead attorney, Jim Darnell, said in a statement. "My client is pleased to be able to put this part of the situation behind him and is eager to satisfy the terms of the agreement."

The allegations stem from a night out on Jan. 30. Crowley said Manziel accosted her at a Dallas hotel, a confrontation that continued downstairs to the valet station. She said he forced her into a car and that a valet disregarded her pleas for help.

The two eventually drove to where her car was parked in front of a Dallas bar, she said in an affidavit. She said Manziel got into the driver's seat and began to drive. Crowley said Manziel stopped when she tried to jump out of the car, but then he dragged her back inside and hit her.

Cleveland drafted Manziel 22nd overall in 2014, and cut him after two tumultuous seasons marked by inconsistent play and off-the-field headlines about his partying and drinking, including one stint in rehab. Since the 2015 season ended, Manziel has been dumped by two agents after both demanded a second trip to rehab.

On Monday, an employee of an Austin bar filed a lawsuit against Manziel,seeking up to $1 million in damages. The plaintiffsays his nose was broken when Manziel punched him.