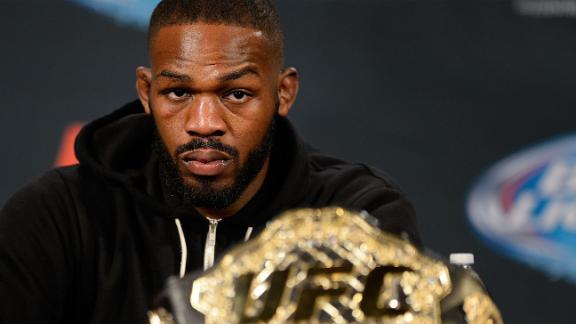 The UFC announced Saturday it has fined light heavyweight champion Jon Jones $25,000 for violating its Athlete Code of Conduct policy.

Jones, 27, tested positive for traces of cocaine during a random urine test administered by the Nevada State Athletic Commission on Dec. 4. The unannounced test was taken ahead of Jones' eighth title defense against Daniel Cormier in Las Vegas on Jan. 3. Jones (21-1) won the bout via unanimous decision.

Results of the failed test were not made public until after the fight. UFC officials confirmed they were aware of the positive test Dec. 23, but never considered canceling the championship bout. On Jan. 6, Jones stated he had checked himself into a drug treatment facility.

In a statement released Saturday, UFC officials said the $25,000 fine would be donated to a substance-abuse prevention program. According to the release, the UFC delayed discipline on Jones in order to receive the results of urine and blood tests taken the night of the fight. The UFC stated all results from those tests are negative. The NSAC has yet to confirm.

The result of Jones' win Jan. 3 will stand, as the Dec. 4 drug test technically falls under a time period that is considered "out-of-competition" by the NSAC. Cocaine, and other drugs of abuse, are only banned "in-competition" by the World Anti-Doping Agency. The NSAC currently utilizes the WADA banned substance list, but is discussing possible changes in light of Jones' situation.

Jones' reported purse to the NSAC was $500,000. The NSAC fined Jones $50,000 for his actions during a brawl with Cormier at a prefight news conference on Aug. 4 in Las Vegas.