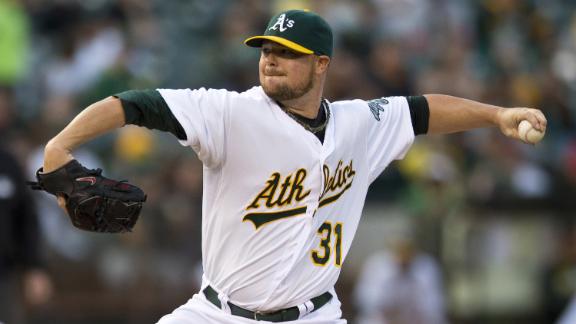 The Jon Lester talks have entered the final turn, with an expectation that a choice will be made no earlier than Monday night and no later than Tuesday, according to sources involved in the negotiations.

Once Lester has a general agreement in place with a team, there will be other issues to resolve before there is a formal announcement, from a medical review to a physical examination.

Henry and other members of Red Sox ownership had previously met with Lester during the free-agent process, the website reported.

Lester, 30, went 6-4 with a 2.35 ERA for the Oakland Athletics after he was acquired in a blockbuster trade deadline deal with the Red Sox in exchange for outfielder Yoenis Cespedes. Overall, he was 16-11 with a career-best 2.45 ERA in 2014.

He was on the hill for the A's in the American League wild-card game against the Kansas City Royals and left in the eighth inning with runners on first and second with one out and his team leading 7-4. The Royals eventually won the game 9-8 in 12 innings.

Lester is noted for his performance in the postseason, where he has a 6-4 record and 2.57 ERA in 14 appearances. He's been dominant in the World Series, where he is 3-0 with a 0.43 ERA in three starts, helping the Red Sox win two championships.

Lester, who has a career mark of 116-67 with a 3.58 ERA in nine seasons, rejected a four-year, $70 million contract extension offer from the Red Sox in the spring. He was paid $13 million last season.

Lester Decision Expected By Tuesday
Buster Olney discusses the report that free-agent pitcher Jon Lester is expected to make a decision no earlier than Monday night and no later than Tuesday.