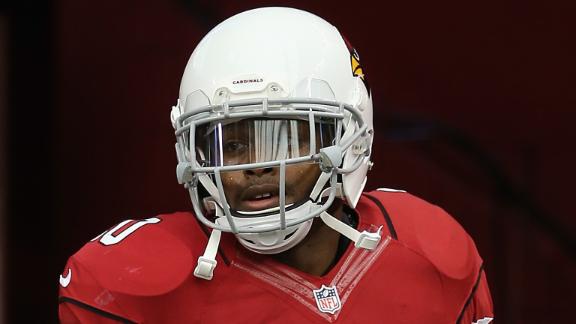 PHOENIX -- Arizona Cardinals running back Jonathan Dwyer pleaded not guilty on Monday to aggravated assault after being accused of assaulting his wife during two arguments at their Phoenix apartment.

Dwyer entered his plea to the felony and eight misdemeanors, including assault, at a brief arraignment in Maricopa County Superior Court.

Investigators have said Dwyer broke his wife's nose with a head-butt during a July 21 argument, and the next day punched her and threw a shoe at his 17-month-old son, who wasn't injured.

Dwyer was initially booked on suspicion of aggravated assault against his son but was not indicted on that allegation.

His wife told authorities the first assault occurred after she learned about Dwyer's recent phone contact with another woman.

The running back answered a few questions by Maricopa County Court commissioner Casey Newcomb about his name and birthday, and whether he had provided a DNA sample.

"Yes, sir," Dwyer said in response to the DNA question.

He was arrested last month as the NFL and commissioner Roger Goodell came under fire amid a series of allegedly violent off-the-field encounters involving some marquee players, including Ray Rice, Adrian Peterson and Greg Hardy.

The NFL has said the Dwyer case will be reviewed under the league's personal-conduct policy.

The day after his arrest, the Cardinals placed Dwyer on the reserve/non-football illness list, meaning he can't play for Arizona again this season.

His next court appearance is Nov. 20.