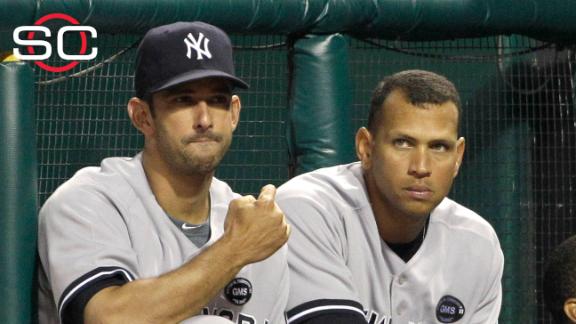 NEW YORK -- Former Yankees catcher Jorge Posada says that he resents players associated with performance-enhancing drugs, such as former teammates Alex Rodriguez and Roger Clemens, and that they should never be inducted into the Hall of Fame.

"I don't think it's fair," Posada told "CBS This Morning" on Wednesday. "I really don't. I think the guys that need to be in the Hall of Fame need to be a player that played with no controversy."

The five-time All-Star lamented the fact he missed out on the American League MVP in 2003 when Rodriguez won the award.

"I was almost there," said Posada, who finished third in the voting behind A-Rod and Carlos Delgado. "You know what could've happened if ... you know, it's tough. It's really tough."

Posada said Wednesday he had not made his views known to Rodriguez, adding he thought Rodriguez would be surprised to hear his stance.

Posada later offered an apology to Rodriguez during an interview with WFAN on Thursday.

"I tried to text him yesterday," Posada told WFAN. "I feel like I was cornered into this answer. I know better. I was really caught off guard."

"The thing is, the book is not a controversial book," he said on WFAN. "And the questions that have been asked from the get-go are very controversial."

"In fairness to Jorgie, I haven't read the book," Rodriguez said Wednesday, when asked about Posada's thoughts. "I haven't read anything, so I have to put it all in context. I'm not really prepped to answer those questions."

Rodriguez, speaking before that night's road game against the Rays, refrained from being critical of his former teammate.

"I consider Jorgie a friend," Rodriguez said. "Jorgie's always worn his heart on his sleeve and that's fine. He was a great teammate and a great player for a long time. What I remember the most is sharing and winning a championship in '09. I have nothing but good memories."

When asked specifically about finishing ahead of Posada in the 2003 MVP voting, Rodriguez said he'd rather move forward.

Posada could have a chance to tell Rodriguez his thoughts in person on May 24, when the Yankees retire Bernie Williams' No. 51. Posada will have his No. 20 retired on Aug. 22.

Asked if he thought those meetings might be awkward, Rodriguez said, "No, not at all. Jorgie is a friend. We'll keep it simple. Keep it light."

Throughout his career, Posada's best friend on the Yankees was Derek Jeter, whomPosada often referred to as his "brother."

Jeter and A-Rod's relationship through the years has been famously hot-and-cold.

Clemens has not been back to Yankee Stadium for any official activities since being named in the Mitchell report -- on the use of performance-enhancing drugs in MLB -- in 2007 and fighting the charges.

Information from ESPNNewYork.com's Wallace Matthews contributed to this report.