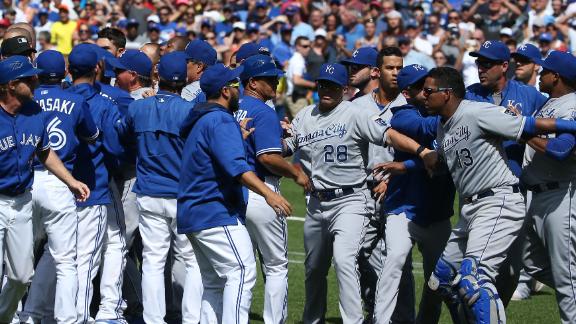 TORONTO -- TheKansas City Royals and Toronto Blue Jayshave moved on: After an exchange of hit batters, they're now trading barbs on Twitter.

That prompted Royals pitcher Yordano Ventura to post tweets calling Bautista a "nobody" and accusing him of stealing signs. Ventura later deleted the messages.

Bautista took the high road when asked to respond to Ventura's comments Monday.

"He's a young player that could use some maturing," Bautista said. "Hopefully he focuses on playing the game and allowing his ability to create a name for himself."

Ventura apologized later Mondayin a tweet to Bautista that was written in Spanish.

"At this moment I am realizing that rage sometimes takes over us as humans and that is what happened with me with the comment that I made about Jose whom is a great human being," he wrote. "I ask him and the fans for their forgiveness. They find themselves shocked with my actions and I am very regretful.

"We all make mistakes and we learn from them. We all know how my temperament can be and I am getting much better as a person. Because of that and this incident which by me apologizing does not make me less of a man for something that I did while being a hot head, I want to once again apologize and I would like to thank God whom gives me the capability to recognize my mistakes."

Bautista didn't back down from his remarks about Yost, calling the manager's praise of Wolf "ridiculous."

"I thought Jim Wolf did a tremendous job understanding the game, understanding what's intentional," Yost said Sunday, according to the Kansas City Star. "Was it intentional on their part to hit Esky? Absolutely."

Donaldson complained to Wolf after Volquez and reliever Ryan Madson missed high and inside later in the game. Madson also hit Toronto's Troy Tulowitzki. Neither pitcher was ejected.

Volquez responded after the game by calling Donaldson "a little baby."

"He got mad at everybody like he's Barry Bonds," Volquez said Sunday, according to the Star. "He's not Barry Bonds. He's got three years in the league. We've been around longer than he has."

Wolf ejected Sanchez after Escobar was hit on the thigh in the eighth, causing both benches and both bullpens to empty. Blue Jays manager John Gibbons, who had been ejected earlier for arguing with Wolf, returned to the field for the melee. No punches were thrown.