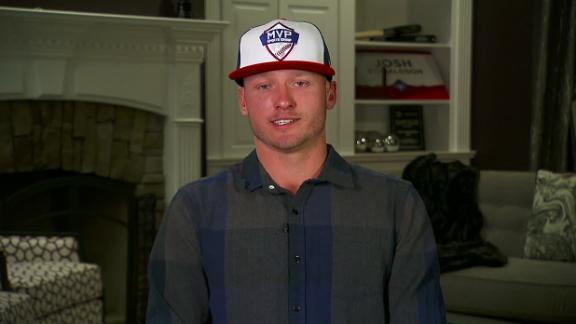 Josh Donaldsonwas named the American League's Most Valuable Player on Thursday, becoming the first member of the Toronto Blue Jays to win the MVP award in nearly 30 years.

Donaldson got 23 first-place votes from members of the Baseball Writers' Association of America.Los Angeles AngelsoutfielderMike Trout, whowon the award last season, got the seven other first-place votes and finished second for the third time.Kansas City RoyalsoutfielderLorenzo Cainwas third.

"You know going into a season that if you're ultimately going to win an MVP, you've got to put up better numbers than Mike," Donaldson said.

A fifth-year third baseman, Donaldson led the AL in RBIs with 123 and was third in the AL with 41 home runs. His 8.8 WAR was the third-best in the majors.

Acquired in an offseason trade with the Oakland Athletics, Donaldson was a spark plug for Toronto's potent offensive attack and helped propel the team back into the playoffs for the first time since 1993.The Blue Jays won 93 games to claim the AL East title and went on to make the AL Championship Series, where they lost to eventual World Series winner Kansas City in six games.

"We tore down a lot of thresholds this organization has had," Donaldson said, adding of the Jays' division title, "For us to come out on top ... I definitely think that helped."

Donaldson also was voted the top major leaguer and the AL's outstanding player by his peers at the annual Players Choice Awards earlier this month.

He is Toronto's first MVP since George Bell won the award in 1987. Bell congratulated Donaldson in a video posted on the Blue Jays' Twitter account.