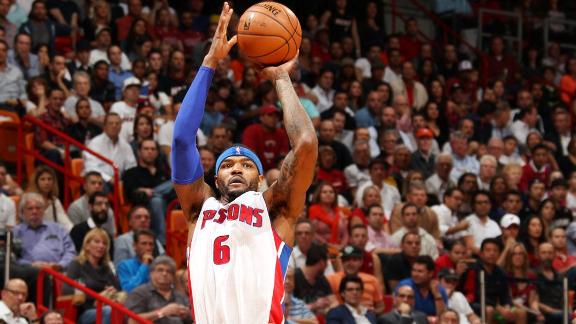 The Detroit Pistons and the Sacramento Kings have resumed trade discussions on a deal that could send Josh Smith to Sacramento, according to sources with knowledge of the talks.

Sources told ESPN.com the Kings have continued to express interest in Smith and the parties are on the hunt for a third team that could help facilitate the deal.

As ESPN.com reported last month, Detroit and Sacramento have engaged in trade discussions that would potentially land Smith in the same frontcourt with DeMarcus Cousins and Rudy Gay. Initial talks called for Sacramento to send Jason Thompson and either Derrick Williams or Jason Terry to the Pistons for Smith, but those discussions reached an impasse and were pushed into July along with the rest of both teams' free-agent business, sources said.

Sources said the Pistons also seriously discussed various sign-and-trade scenarios this month that would have landed restricted free agent Greg Monroe in Portland, but the Blazers ultimately pulled themselves out of the race for Monroe by signing free-agent big man Chris Kaman to join Robin Lopez in the Blazers' center rotation.

Skeptics will inevitably question whether the Kings should indeed take the gamble of trying to fit Smith in alongside Cousins and Gay, especially with three years and $40.5 million remaining on Smith's contract from the Pistons last summer and in the wake of his struggles playing alongside Detroit big men Andre Drummond and Monroe.

Sources say the Kings continue to give the addition of Smith serious consideration, largely because the discussions to date have not required them to part with any players in their long-term plans and would also add a versatile and athletic defender to a roster that badly needs one, given how much Kings coach Mike Malone is known to preach defense.

Kings owner Vivek Ranadive, furthermore, is known to be fond of splashy moves. And trading for Smith, given the lukewarm reviews of his first season with the Pistons, would certainly qualify as bold.

Another potential bonus is Smith's close relationship with Boston Celtics point guard Rajon Rondo, whom Sacramento has been targeting in trade talks for some time.

The Kings, sources say, prefer to trade Terry rather than buy him out of the final year of his contract valued at nearly $6 million, while Terry has said he's interested in a return to the Dallas Mavericks if he's ultimately released and can get to free agency.