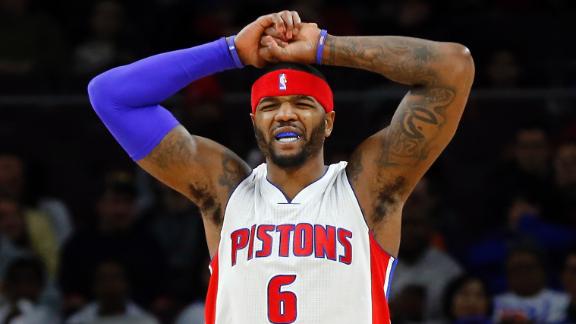 Wanting to play for a winning team with a chance to win the title, Josh Smithsaid Wednesday he has decided to join the Houston Rockets.

Though the Rockets have not announced the move, Smith told FOX26 Sports that he is looking forward to playing with one of his closest friends and former AAU teammateDwight Howard.

"It's an exciting time for me," Smith told FOX26 Sports. "Being able to be reunited with a good friend and one of the best teammates I ever played with, I think we can definitely do something special.

"Playing beside the best 2-guard in the game right now in James Harden, what more can you ask for."

The veteran forward, let go Monday by the Detroit Pistonsless than halfway into his four-year, $54 million contract, cleared waivers Wednesday.

The Dallas Mavericks, Miami Heat, Sacramento Kings, Los Angeles Clippers and Memphis Grizzlies all had been listed as potential suitors for Smith's services.

The Rockets next take the court against the host Grizzlies at 8 p.m. ET Friday.

Houston is three games behind Golden State in the Western Conference standings and just a half-game behind Memphis for the 3-seed. Smith said he thinks he can help the Rockets get to the next level.

"Just add another basketball IQ, which will help when we make it to the postseason."

As ESPN.com's Marc Stein reported late Tuesday, Houston assured Smith that he would start if he joined the Rockets, which essentially clinched his decision.

The Rockets also had their biannual exception, valued at $2.1 million, to offer Smith, who is 29.

Sources said Wednesday that Smith made it known that he would only consider teams that would guarantee him a starting spot, which essentially made it a choice between Houston and Miami.

He will be playing for coach Kevin McHale, who signed a three-year extension on Wednesday.

Chris Broussard, Marc Stein and Ramona Shelburne of ESPN.com contributed to this report.