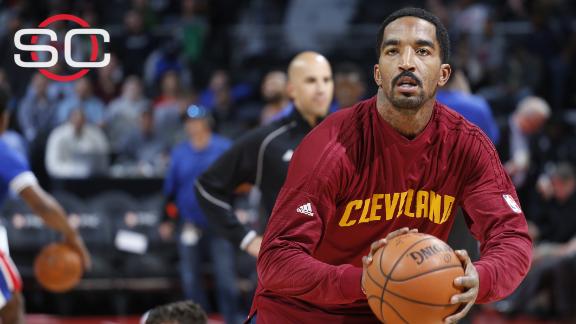 According to the Daily News, which cited police sources, Smith allegedly confronted the teen, Justin Brown, after Brown heckled the 12-year veteran for being traded from the New York Knicks last season. The alleged incident occurred at about 4 a.m. ET on Nov. 13, outside Artichoke Basille's Pizza, not far from the popular lounge 1 OAK.

The Cavs were in town to play the Knicks later the night of Nov. 13.

Police sources told the Daily News that Brown alleged that Smith, 30, "checked him against the exterior of the building and put his hands around Brown's neck."

Smith has not spoken to the police about the alleged incident, according to Spiro. The veteran guard did send out a tweet Friday night.

Smith addressed the situation at shootaround Saturday and echoed his tweet.

"First of all, things haven't been reported the right way," Smith said. "But the team and I have spoke. We had conversations. Coach (David Blatt), Griff (general manager David Griffin) and some of the players. I just don't want to be a distraction to nobody else. And we just got to move forward."

The Cavaliers said they are aware of the situation. Cleveland did not practice Friday ahead of the team's home game against the Atlanta Hawks on Saturday.

"We are aware of the story and have spoken to J.R. about it," Griffin said. "J.R.'s attorney has issued a statement on the matter and there will be no further comment from the team on this at this point."

According to the Daily News, a police report was not filed until three days after the alleged confrontation between Smith and Brown, even though officers were present.

An email sent by ESPN.com to the New York Police Department seeking comment on the alleged incident was not immediately returned.

That area of Chelsea was in the news earlier this year, when NBA players Thabo Sefolosha, Pero Antic and Chris Copeland were involved in a late-night incident that occurred outside 1 OAK. At the time, Smith spoke up about the perils of being a public figure while trying to enjoy the nightlife.

"For me, I feel like a target every time," Smith said. "So, I try to handle myself with care when I'm out and about. It's one of those situations when you're out at 4 in the morning -- I'm not saying it's [Copeland's] fault by any means -- but when you're out at 4 in the morning, there's no way you should be walking anywhere. Get in your car and go home or go wherever you're going. That's one of my cardinal rules. You don't just stand outside of the events like that. You just get in and go and keep it moving."

Smith is averaging 8.6 points on 37.8 percent shooting, 3.6 rebounds and 1.8 assists in nine games for the Cavaliers this season.