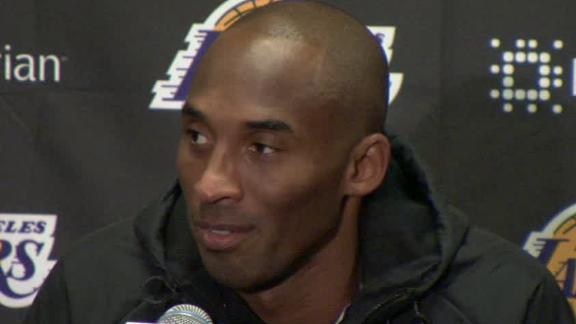 The Lakers said the initial diagnosis by team doctors at Staples Center was a broken tibia. Randle was to undergo further evaluation, and the Lakers said they would provide an update on his status Wednesday.

A source told ESPN.com's Ramona Shelburne that Randle suffered a clean break of the tibia and was having surgery Wednesday morning.

A timetable for Randle's recovery won't be known until he's evaluated after surgery. But the Lakers' initial fear was that he'd miss 4-6 months, according to sources.

"It is heartbreaking, because I saw him all summer," coach Byron Scott said. "I saw the work that he was putting in. I saw the progression that he was making, the steps that he was taking to get better. And his first game, he goes down. I don't think anybody in that locker room is happy about the way we played, but we're even more saddened about the fact that we lost one of our young guys."

Randle, the 19-year-old former University of Kentucky standout who was selected seventh overall in June, was driving to the basket when his right foot buckled and he collapsed on the court. Scott said he was told that other players heard a "pop" when Randle went down.

The Dallas native held his leg for several minutes while medical officials tended to him. The Staples Center crowd fell quiet as a stretcher was brought out, and Randle's teammates huddled around him beneath the basket. Lakers star Kobe Bryant comforted him and shook his head in disbelief.

"Even for myself, being a veteran and dealing with something like this, it's tough," said Bryant, who missed most of last season with two major injuries. "For him being a 19-year-old kid, it's tough. That's what we're here for. We're here to pick him up and take it day by day."

"It's a fluke injury," he added. "There's nothing you can do about that. He worked extremely hard, he trained extremely hard. Then something like this happens, so you've kind of got to give yourself up to that and control what you can control, and what happens, happens. And now it's on him to control how he handles this."

Randle scored two points on 1-for-3 shooting in 14 minutes. Scott said he spoke with the rookie after the game.

"I just told him to stay strong," Scott said. "Adversity tests the true character of a man. This is some adversity that we're facing with a young guy being out, and obviously, it's something that he's facing. I feel for him. I feel extremely bad for him. He was kind of crying, and I just told him to stay strong and that it's going to make him a better basketball player."

Bryant agreed that losing a lottery pick to serious injury during his debut was a hard blow for a rebuilding franchise.

"I think what this franchise has always been good about doing is surrounding young players with players who have come before," he said. "He has a great cast around him -- myself and James Worthy and AC Green and Magic [Johnson]. We're all here. We'll help him through this. He'll come back a basketball player. That's the goal, is to try to find a silver lining within anything."

Worthy, whose 1983 rookie season with the Lakers ended prematurely because he broke his leg, tweeted words of encouragement to Randle.

Rockets Win And Randle Injures Leg
James Harden scored 32 points, and Julius Randle was carted off on a stretcher in the fourth quarter of Houston's 108-90 win over the Lakers.