Julius Randle likely out for season 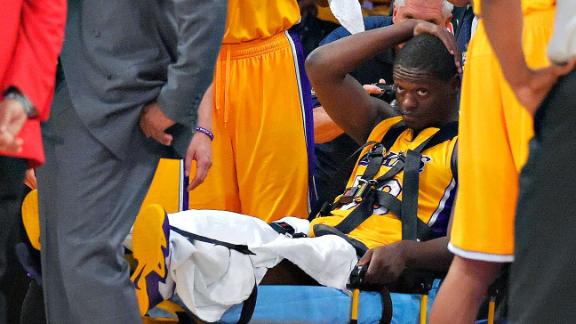 The Los Angeles Lakers expect Julius Randle to miss the rest of the season after the rookie forward underwent surgery Wednesday to repair a fractured tibia that he suffered in his first NBA game.

Randle, the Lakers' top draft choice and the seventh overall selection in June, suffered the injury in the fourth quarter Tuesday night in the Lakers' season-opening loss to the Houston Rockets at Staples Center.

The 19-year old drove to the basket, planted his right foot awkwardly and collapsed. Randle, a former Kentucky standout, remained on the court until he was carted off on a stretcher. He scored two points.

"I didn't get a whole lot of sleep just thinking about the young fella," Lakers coach Byron Scott said Wednesday before facing the Suns. "(I was) talking to him after the game, basically just holding him and listening to him cry and trying to console him as much as possible. It's a tough situation.

"(The) young man obviously has a promising future. We're going to miss him for a little while, but we have to regroup. We have to basically move on, as crazy as it sounds. We have to move on."

Randle is the second Lakers player in as many weeks to be ruled out for the season because of health issues. Last week, the team announced that 40-year-old point guard Steve Nash would remain sidelined because of recurring back issues.

The Lakers' health troubles date back to last season, when their players combined to miss a league-high 319 games because of injury.

It's expected that the Lakers will file for another disabled player exception with the NBA, as they have done with Nash. If granted in Randle's case, the team would expect to receive an additional $1.5 million.

Randle is the Lakers' first first-round pick in seven years, a talented prospect in one of the more touted lottery classes in years. He was also their highest draft choice since the selection ofJames Worthy first overall in 1982. Worthy's rookie season also ended early because of a broken leg.

Randle Likely Out For Season
ESPNLosAngeles.com's Baxter Holmes discusses the news of the Lakers expecting Julius Randle to miss the rest of the season after undergoing surgery to repair a fractured tibia that he suffered in his first NBA game.

Rockets Win As Randle Injures Leg
James Harden scored 32 points and Julius Randle was carted off on a stretcher in the fourth quarter of Houston's 108-90 win over the Lakers.