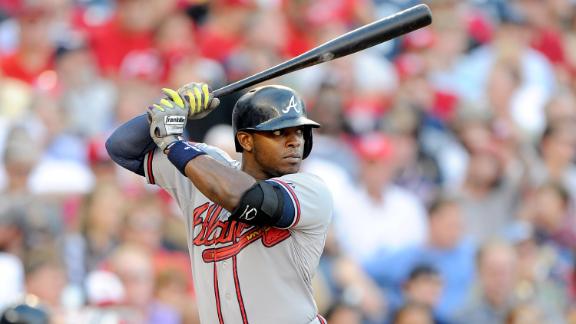 In fact, Upton, who was introduced along with new December acquisitionsWil Myers, Derek Norris and Will Middlebrookson Tuesday,has 10 homers and a .291 average in 46 career games at Petco Park, where the spacious dimensions have gotten into some Padres hitters' heads.

The Padres, who've missed the playoffs eight straight seasons, had a historically awful offense in the first half of 2014. Although they played better in the second half, they finished at the bottom of the majors with a .226 average, .292 on-base percentage and 535 runs. Their 109 homers were the second-fewest in baseball.

"Everybody says it's big. I don't think so," he said. "It usually plays pretty fair. It's one of those places where if you hit a home run, it's going to be a home run. I've enjoyed a bit of success here, and I enjoy playing here.

"I think the park's great. It's a great atmosphere. I mean, how can you beat playing in San Diego every day? The new guys are going to love it, the guys who haven't played here."

Padres manager Bud Black envisions Upton in left, Myers in center and sluggerMatt Kemp, who was introduced three weeks ago,in right. All are right-handed hitters, and the hope is they'll wear out leftfield at Petco Park.

Norris, a catcher, and Middlebrooks, a third baseman, also are right-handed hitters.

The five stars were obtained in separate deals during mid-December.The Padres will control Norris, Middlebrooks, Myers and Kemp for several seasons. Upton is entering the final year of his contract, at $14.5 million.

Although Upton has some familiarity with his new surroundings, Myers is a stranger to his new digs and Norris admitted knowing nothing about the team other than that Tony Gwynn once played for them.

"Everybody talks about how it's a huge park, but some of the players I've talked to said it's normal," said Myers, the 2011 AL Rookie of the Year who came over from Tampa Bay in an 11-player, three-team trade. It plays fair. If you hit it, it's going to go. If you don't, it's not."

Asked about his reaction when he found out he'd been traded, Norris, who was an All-Star last season for Oakland, said: "I was trying to figure out what a Padre was. I didn't really know. Growing up watching guys like Tony Gwynn represent this organization, that was about the closest I got to knowing what the organization was. I was happy to be part of something like that."

Norris trimmed the bushy beard he had sported with the A's.

"You've got to tame the beast before you can let it go," he quipped. "You don't want to show up with it out of control, you know?"

Middlebrookssaid he was excited to be going from "the East Coast to the best coast."

General manager A.J. Preller is happy in his effort to transform the worst offense in the major leagues into a contender.

"You want to give your coaching staff a chance," said Preller, who was hired in August. "If they go out and perform, we have a chance to win and have an offensive unit that's championship-caliber."

"When we brought A.J. in, we found someone who embraced the task," Fowler said. "He wasn't afraid of the San Francisco Giants or the Dodgers. He just had this David-Goliath mentality that he wanted to do it. He had this sort of look and this swagger about him.

"We had confidence he would do what he said he would do, and he had priorities set up. We thought we'd get maybe 60 percent of what we were looking at. He basically got everything he set out to do."