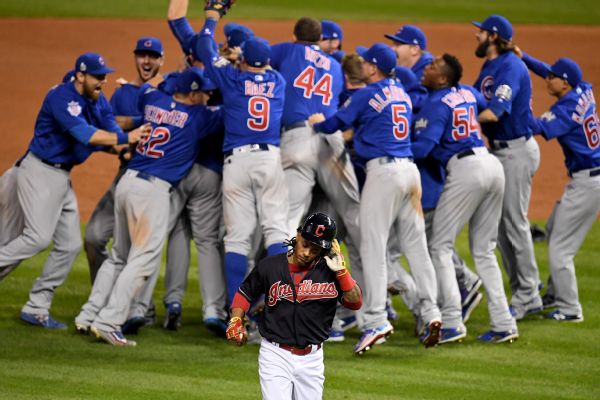 GREENWOOD, Ind. -- Wayne Williams kept a pledge he and his father made to each other and shared a moment they'd both been waiting for all their lives.

The North Carolina man drove to his father's gravesite in Indiana to listen to the Chicago Cubs win Game 7 of the World Series. Wearing a Joe Maddon replica jersey and a Cubs cap he'd recently purchased, Williams listened to the Cubs' 10-inning, 8-7 victory over the Cleveland Indians on his smartphone Wednesday night at his father's grave in the military section of Greenwood Forest Lawn Cemetery in suburban Indianapolis.

Williams told WTHR-TV he and his father had a pact: When the Cubs got into the World Series again, they would listen to the games together.

His father, also named Wayne Williams, was a Navy veteran. He died of cancer in 1980 at age 53. Williams said he knew on Sunday night what he would have to do if the Cubs kept their title hopes alive.

"If they win tomorrow, I have to be heading out the next morning," he said, noting that his wife "supported it fully."

The 68-year-old retired customer trainer said unlit roads made the trip a little difficult. He also said trying to get to his father's gravesite required as few stops as possible if he was to make it by the first pitch.

Cemetery workers kept the gates open for Williams, who was greeted by TV news crews as he took his spot and tuned in.

Finally, after 10 innings and a rain delay, the Cubs rallied to take the lead and held off the last bid for a Cleveland rally. Williams, a Cubs "W" flag draped on his fold-out chair, said his celebration was subdued.

"I just kind of said We did it,' like I had anything to do with it," he said. "I know how much he would have enjoyed it."

As he headed back to his home in Fuquay-Varina, North Carolina, Williams said he would watch a recording of the game. By then, he said he thinks the idea of the World Series championship will have sunken in.

"I'll be able to work my way through it," he said.