Kentucky even money to win tourney 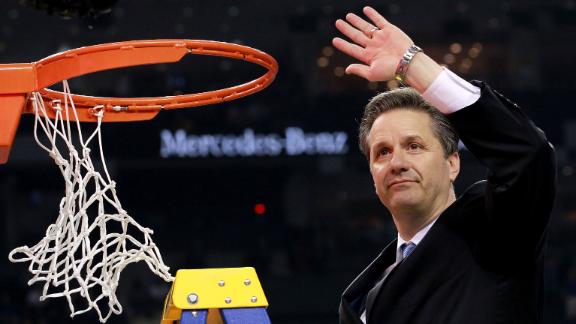 The Kentucky Wildcats are even money to win the NCAA tournament at one Las Vegas sportsbook.

The Westgate Las Vegas SuperBook updated its odds to win the NCAA tournament Sunday just a few hours after the bracket was released. The undefeated Wildcats, the No. 1 overall seed, top the odds at even. In comparison, Florida was the favorite entering last year's tournament at 4-1.

Ed Salmons, the SuperBook's head college basketball oddsmaker and a 20-plus-year Las Vegas veteran, said Kentucky is the first team he remembers entering the tournament at even money in at least 20 years. Kentucky is looking to become the first team to finish the season undefeated since the Indiana Hoosiers ran the table in 1975-76 under coach Bob Knight.

At 6-1, No. 1 seeds Duke and Wisconsin have the next-best odds behind Kentucky. Duke, the top seed in the South Region, awaits the North Florida-Robert Morris winner. Wisconsin, the No. 1 seed in the West Region, would face Kentucky in the semifinals. Villanova, the fourth No. 1 seed, is 8-1 to win it all.

Eastern Washington and Valparaiso are the biggest listed long shots at 1,000-1. The field is 100-1.

Las Vegas sportsbook operator CG Technology was the first shop to post point spreads for the opening NCAA tournament games Sunday. No. 2-seeded Arizona opened as the biggest favorite on the board. The Wildcats are 23-point favorites over Texas Southern. Villanova is a 22-point favorite over Lafayette.

That will change, however, after Kentucky's opponent is decided. The Wildcats will be massive favorites over the winner of Manhattan-Hampton in the first round. Duke was a 47-point favorite over Florida A&M in a 1999 first-round game, the largest NCAA tournament point spread in the past 20 years.

Ten teams -- Gonzaga, Notre Dame, Villanova, Georgetown, Iowa State, Arizona, Virginia, Oklahoma, Kansas and Wisconsin -- opened as double-digit favorites, not including the matchups awaiting winners from the First Four games. Double-digit favorites are 64-7 straight-up in the first round and 81-9 straight-up overall in the past six NCAA tournaments, according to Spreadapedia.com.

Ohio State, the 10th seed in the West Region, is the only team to open as a favorite against a lower-seeded team. But that could change. The Buckeyes opened as 1-point favorites at CG Technology. No. 11 seed Texas is a pick-'em against No. 6 Butler. The Purdue-Cincinnati matchup also opened at pick-'em.

But Kentucky is the storyline in Las Vegas heading into the NCAA tournament. At the SuperBook, more money was bet on the Wildcats to win the national championship than on any other team. Several books have been offering prop bets on Kentucky's standout season. The William Hill sportsbook made the Wildcats 50-1 long shots to finish the season undefeated in June and is now facing a significant liability on it.

The Wynn has been offering Kentucky versus the field as a national championship prop. The biggest bet the Wynn took on the prop was $50,000 on the Wildcats.

"The wise guys are on the field," John Avello, executive director of the Wynn sportsbook, said. "But the big bet was on Kentucky."

Bracket TV: Choosing A Champion
ESPN's Jeff Goodman and Eamonn Brennan reveal their picks for the NCAA tournament and instruct you on how to choose your champion.