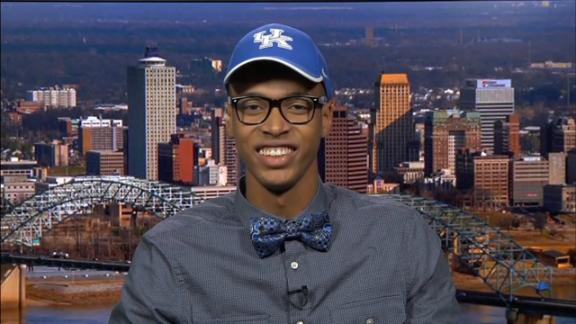 In the span of one hour, Kentucky quickly emerged as the big winner of the early signing period -- as five-star prospects Skal Labissiere and Isaiah Briscoe committed to the Wildcats on Thursday night.

And now, John Calipari's program has the No. 1 recruiting class in the country, according to ESPN.com.

Labissiere, a native of Haiti who attends Lausanne Collegiate School (Tennessee), also had Memphis, Georgetown, Baylor, Tennessee and North Carolina on his list. He took visits to all six of the schools in the final two months of his recruitment. After Labissiere appeared like a sure thing to Memphis for most of his recruitment, Kentucky closed the gap over the past couple of weeks.

"Since my freshman year, I always wanted to go there," Labissiere said during his announcement on ESPNU. "I watched Coach Cal on TV, watched his team on TV with Anthony Davis, Nerlens Noel. That's one of the reasons I worked so hard with my academics and on the court; I wanted to have the chance to play there. My freshman year, I was hoping Coach Cal was going to offer. My sophomore year, first game, he came and offered me. That's where it all started."

Briscoe shuffled through a long list of schools during his recruitment, and didn't even include Kentucky on his list of seven back in June. A strong July that saw Briscoe lead his NJ Playaz AAU program to the Nike Peach Jam championship also changed his recruitment. New schools were added to the mix, including the Wildcats. In late October, the Roselle Catholic (New Jersey) product announced his final three: Kentucky, Connecticut and St. John's. The buzz went back and forth between the Wildcats and Red Storm in recent weeks, but Kentucky again won out.

Labissiere (No. 11 in the ESPN 100) is an elite center, and one who has the potential to be a matchup nightmare at the next level, as well as a dominant shot-blocker. Briscoe (No. 13) is the best point guard in the class, and can play multiple roles at Kentucky.

Don't expect Calipari to slow down, either. The Wildcats are also involved with nearly every five-star player still on the board -- although Thursday's commitments could have an impact on who also joins them.