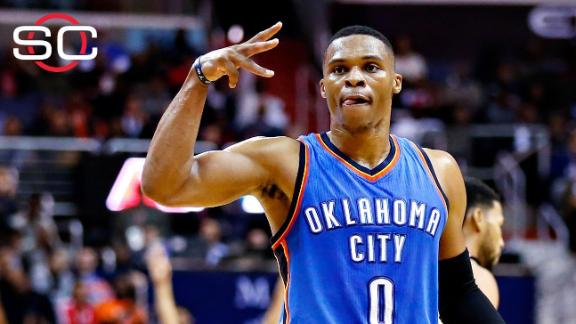 WASHINGTON -- Kevin Durant left Oklahoma City's 125-101 win over the Washington Wizards because of a left hamstring strain and did not return to play in the second half.

He will have an MRI on Wednesday in Oklahoma City, and a clearer timetable for his return will be determined after that.

"Little sore, man," Durant said. "I'll get it checked on tomorrow and see what it's looking like after that."

Late in the second quarter, Durant came down awkwardly after drawing a foul and immediately grabbed at his left leg. He made two free throws and remained in the game for the final two minutes of the half. He walked gingerly to the locker room for halftime and never emerged following the break.

"After that foul, I came down a little awkward and landed on it a little harder than I wanted to, and it pulled," Durant said.

Thunder coach Billy Donovan said he doesn't believe the injury "is too serious" and it's only considered a strain right now.

Durant played in only 27 games last season because of three surgeries to repair a Jones fracture in his right foot. He spent the summer rehabbing and getting ready to play this season but now takes another frustrating hit with a new injury, albeit apparently a much less significant one.

Without Durant, the Thunder went on to roll the Wizards, who were without Bradley Beal due to a shoulder strain, behind a triple-double from Russell Westbrook (22 points, 11 rebounds and 11 assists), 25 points from Dion Waiters and 23 points from Serge Ibaka.

"With Kevin not coming out of the locker room in the second half, I thought our guys came out with great focus, and we got stops defensively, which enabled us to get out on the break," Donovan said. "I thought our guys stepped up and responded in his absence."

The game was Durant's only trip this season to his hometown area to play the Wizards. During the first half, Durant heard light booing from a packed Verizon Center, possibly due to comments made before the Thunder's trip to D.C. He said the reaction last season was "disrespectful" to Wizards players.

In 17 minutes, Durant finished with 14 points on 4-of-8 shooting, plus 10 rebounds and four assists. The Thunder next play the Philadelphia 76ers on Friday.