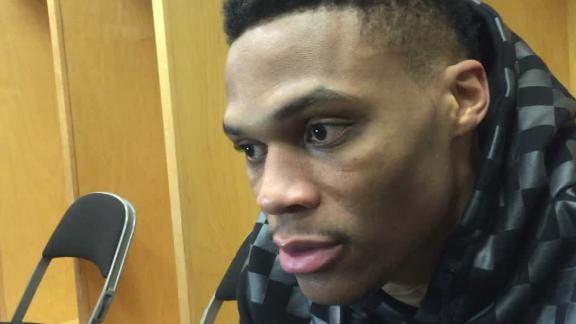 OKLAHOMA CITY --Kevin Durant echoed Russell Westbrook's take on Reggie Jackson'scelebration at the end of the Detroit Pistons' 88-82 win over the Oklahoma City Thunderon Tuesday, calling it a "bush league" move by his former teammate.

"It was bush league, in my opinion," Durant said Thursday following the team's shootaround. "Jumping up and down, running around. I understand you're happy you won the game, but our whole team didn't play. We would've beat the hell out of them if it did."

Durant, along with Serge Ibaka, didn't play against the Pistons because of planned rest, so he was unavailable to reporters after the game Tuesday.

"I wanted to play against Detroit, for sure, but you know, it's Detroit," Durant said. "Who cares about Detroit?"

Like Westbrook, Durant hasn't been shy when discussing Jackson and his controversial departure from the Thunder, making it a point earlier in the season to leave Jackson's name out when listing the Pistons' best players.

Jackson's celebration came at the end of a close game in which he scored 14 points on just 4-of-15 shooting, but closed by scoring eight of the Pistons' last 11.

Following a game-clinching rebound by Aron Baynes and an ensuing Thunder foul, Jackson bounced along the sideline waving his arms at the crowd, while looking over at the Thunder bench. When Baynes shot his free throws, Jackson could be seen saying "get out" to Thunder players. He then jawed with Steven Adams for an extended period of time.

"I know I don't talk like that, but that pissed me off," Durant said. "But what can I do about it? Some guys are who they are. They won the game, congrats."

Jackson's history with the Thunder extends back to training camp last season, where he was extremely vocal about wanting a starting role. That rubbed a number of teammates the wrong way -- especially Durant and Westbrook -- and eventually culminated with Jackson requesting a trade a day before last season's deadline.

The Thunder accommodated that request in a three-team deal that sent Jackson to the Pistons and brought Enes Kanter to OKC.

How the Westbrook-Jackson relationship came to be
ESPN Thunder reporter Royce Young describes how the relationship between Russell Westbrook and Reggie Jackson became "heavily salty" and resulted in Jackson requesting a trade out of Oklahoma City.