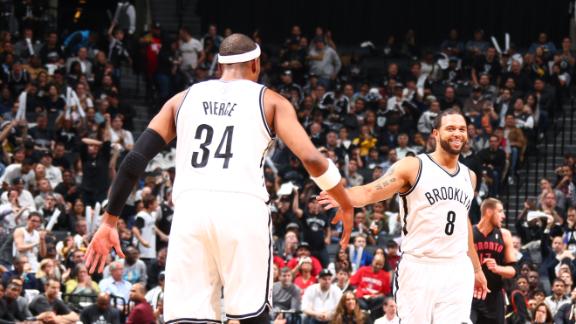 But Kevin Garnett and Paul Pierce, who played in front of some absolutely raucous playoff crowds for several years at Boston's TD Bank Garden, expected more.

"They could do better," Garnett said Saturday. "I was expecting Brooklyn to be real hostile, New York-style. I know what it's like to come here as the opposition, so our crowd could do better, but they were there when we needed them, and we fed off of them."

Added Pierce: "Well, we know gradually they got into it. Hopefully the next game, it will get a lot better from the start. We want to come out from the jump, from the beginning, and have them in the game. It shouldn't take a big play from us. We want them behind us. It was a great crowd tonight."

"I mean, I thought the crowd was pretty good," Joe Johnson said. "We just gotta go out and make them be excited, we gotta make plays on the court. That's it."

The Nets finally got going late in the second quarter, when Pierce's crossover dribble and slam dunk highlighted a 10-0 run. In the final minute, Garnett dove for a loose ball.

When he got up, Garnett was screaming and popping his white home jersey.

"I don't really know [what I was doing]. I blacked out at that point," Garnett said. "I have a kid at the game, setting an example, being a role model, all that goes out the door. I'm playing with heart at that point, I'm playing with passion, I'm feeding off the crowd; my friends, my family there; my teammates; J [coach Jason Kidd]. I'm just going. I have no idea what I'm doing. I'm just going."

Garnett was eager to see what the atmosphere was going to be like. He figured the fans didn't appreciate it when Raptors general manager Masai Ujiri said, "F--- Brooklyn!" prior to Game 1 of the series.

"I don't know if you can say 'F Brooklyn' and then come into Brooklyn," Garnett said earlier in the week. "So we're about to see what it's like."

The crowd will have a chance to get better on Sunday night in Game 4. Brooklyn leads the series 2-1.

Nets Hold Off Furious Rally From Raptors
Despite the Raptors going on a 21-7 run in the fourth quarter, the Nets held on for a 102-98 win and a 2-1 series lead.