Knicks reach out to Frank Vogel's agents about coaching vacancy 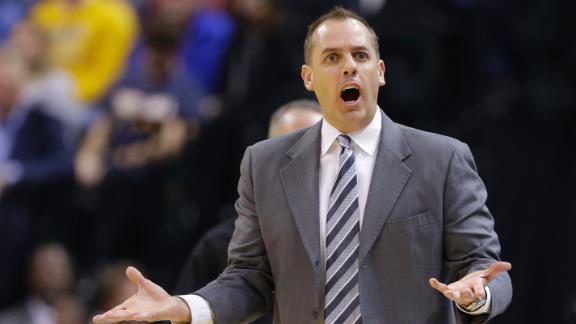 NEW YORK -- The New York Knicks have reached out to Frank Vogel's agents to gauge the ex-Indiana Pacers coach's interest in the club's coaching vacancy, league sources confirmed to ESPN.

The contact, preliminary in nature, was made by Knicks general manager Steve Mills, according to sources.

The Pacers parted ways with Vogel on Thursday. Team president Larry Bird said it was "time for a new voice" and decided not to offer Vogel a new contract.

In six seasons as Pacers coach, Vogel had a 250-181 regular-season record and a 31-30 playoff record, losing in Game 7 of the first round to Torontothis season.

Vogel has ties to the Knicks. In 2005-06, he worked as an advance scout for the Los Angeles Lakers, which were then coached by current Knicks president Phil Jackson.

In addition to gauging Vogel's interest, the Knicks also spoke with new Lakers coach Luke Walton and ex-Cleveland Cavaliers coach David Blatt about their opening. The Knicks' interim coach, Kurt Rambis, is also a candidate for the head coaching job.

Jackson had a casual conversation with Walton about the Knicks job before Walton accepted the Lakers' head coaching job, though both sides said that it was not a formal interview.

Blatt, who guided the Cavaliers to the NBA Finals last season before his abrupt firing in January, is a known quantity to Mills. The Knicks general manager played with Blatt at Princeton.

No coach in league history had been dismissed in-season with a higher winning percentage than Blatt's .732. It is unknown if the Knicks have had contact with Blatt since their meeting last month.

Jackson laid out some criteria for his coaching search last month. The team president made it clear that he's fully committed to running the triangle offense and will look mostly at candidates who have a prior relationship with him.

Vogel did not run the triangle offense in Indiana but has spoken publicly about his respect for Jackson in the past.

"From the standpoint of studying the NBA game, I was always a big fan of Phil Jackson and his approach," Vogel told the Indianapolis publication Nuvo in 2013. "Obviously he had great players, but there were a lot of coaches with great players that didn't win at the level he did. That was a big reason why I hired [Pacers associate head coach] Brian Shaw. He was as close to Phil as anyone could be and I thought I could rely on that experience and it's been awesome."