Kobe Bryant, in home away from home, thrives on final Boston boos 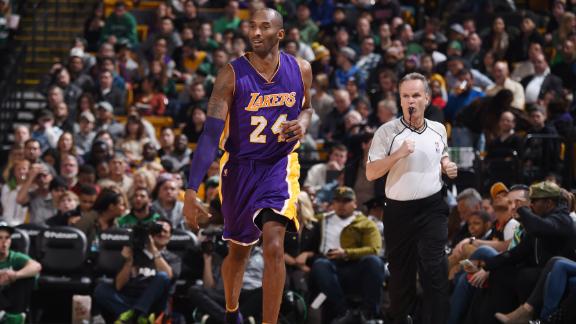 BOSTON -- The cheers began about 20 minutes before tipoff Wednesday, when Kobe Bryant emerged from the visitors tunnel and hustled onto the parquet floor once more.

They grew when his grinning mug graced the video board during warm-ups, with fans edging toward the court, unholstering smartphones to snap pictures.

Then, a bit later, the starting introductions, the evening's most anticipated moment at TD Garden. What reaction would follow, given everything that came before -- the history, with him, with the Los Angeles Lakers?

CelticsPA man Eddie Palladino gave the first four Lakers the usual visitor treatment -- quick, easy, monotone -- and then a seconds-long pause followed as the camera panned to Bryant, alone on the bench.

The image held there for a few seconds on the massive screen hanging over half-court: Bryant sitting, leaning over, his elbows on his knees, looking at the floor, spotlighted in the arena's darkness.

And the cheers began to build again.

Palladino paused, orchestrating the moment, letting it linger and letting the cheers grow.

"Playing his final game in Boston!"

Another dramatic pause, the cheers rising.

Another pause, the cheers spreading, just like the grin on Bryant's face.

With that, Bryant rose from the bench, but just before, a thought crossed his mind.

"I just can't believe this is the last time I'm going to be here," Bryant said after a 112-104 Lakers win. "I can't believe it. It seems like yesterday we were playing in the Finals here."

But there was a contest to be played, and after an introductory ovation, after which he touched his chest and waved to fans, the ball was thrown up.

And the first time that Bryant touched it, the very first time that cowhide leather graced his fingertips, all the cheers that had been built up by the appreciation of his storied career were torn down by the hatred that has simmered throughout the NBA's longest and most vicious rivalry.

Yes, the first time he touched the ball, Bryant was booed, loudly, unlike at any other road arena he has played in this winter, where nothing but love has rained down from fans and washed over him from start to finish. But Bryant, ever the villain, couldn't have been more relieved, more grateful.

"It felt great to get booed," he said. "It was like, the recognition at the top of the game and soon as I touched the ball and they booed, I was like, 'Oh, I'm home.'"

The boos continued, becoming louder with every touch. The crowd booed as he stood at the free throw line in the first half, then cheered when he missed the attempt.

It might have been his final game here, but it was still Celtics-Lakers, and Bryant was still responsible for beating the Celtics in the 2010 Finals, his most cherished title.

Bryant struggled all the while, his shots falling too far short, left or right, or just off the mark entirely. He missed his first eight shots before scoring on back-to-back drives just before halftime, resulting in the first "Ko-be Bry-ant!" chants.

Before the game, Bryant pledged that he would gaze around during breaks in play, at the 17 championship banners that hang in the rafters, or at the sea of green in the crowd, or at Celtics' leprechaun logo on the parquet. And he did look around at all those thing, as he always does, but this time, he held his stare longer.

"Just trying to cherish it as much as possible," he said.

A self-described historian of the game, Bryant has always appreciated and even admired the Celtics, even if they are the enemy of the team he grew to love. He knows their history, all their players, all the famous playoff battles.

He knows everything that went into every banner that hangs above his head.

"This place is always special to me," he said. "The history I think is what makes this city different than all the rest."

His history here dates back two decades, when he worked out for the team prior to the 1996 draft.

"I respected the franchise and history so much that I worked as hard as I could in the workout," Bryant said. "I really wanted to impress them because of the legacy. If they decided to draft me I was going to carry this franchise the way they deserved to be."

But he ended up with the Lakers, and yet, even as he won titles early in his career, Bryant always hoped he would have a chance to play the Celtics for a championship, to become part of a Lakers-Celtics Finals battle just like those he watched on VHS tapes as a child of the famed 1980s matchups between Magic Johnson and Larry Bird.

In 2008, he saw Ray Allen and Kevin Garnett team up with Paul Pierce, and Bryant thought he might finally have a chance.

"I was extremely excited, because [it meant I] might have an opportunity to live out this childhood dream of the Lakers and the Celtics," he said, "Then when you are in that situation, especially in 2010, it's like, I don't want to be the player years from now where the Lakers lost twice against the Celtics. I don't want to be that guy. There was a lot of pressure to not let that happen."

He credits the Celtics, though. The crippling 2008 Finals loss to that team steeled his resolve.

"For the second half of my career, it's the most important piece," he said. "Because when we lost in 2008, that was the turn. That was when I said, 'I have to figure this leadership thing out. I can't go through this [again].'"

Then, referring to the 2009 and 2010 seasons, Bryant said, "This building is a place that really pushed me to win those championships."

That song played constantly throughout that Finals, when Bryant's Lakers were destroyed by 39 points in a series-ending Game 6, and he said he listened to it daily after that, trying to channel his anger and focus.

"I was so happy when that song came on [Wednesday]," he said. "At the Finals, they were playing it at the start of the game, and I was looking for it. That's probably what threw me off at the start of the game. I was waiting for Dropkick Murphys, and they didn't play it. In the fourth quarter, they kind of brought me home a little bit."

It wasn't long after that Bryant hit his biggest shot of the night, a fitting final note here. With 1:40 left, and the Lakers clinging to a two-point lead, Bryant drilled a 28-foot 3-pointer, giving his team a decisive edge.

Fans chanted his name in deafening fashion, but though his clutch 3-pointer couldn't have been more perfectly timed, as if it were scripted, in the moments leading up to it he thought of his legs.

He needed them, now more than ever, because, he said, "I couldn't really feel my [right] shoulder too much."

It has been ailing him lately, one more body part on a long list that has failed him, thanks to career filled with so much mileage and injury.

"I said, I've really got to get my legs under the shot, really jump forward on the shot, and then once it went down, it was like, 'Thank God,'" Bryant said after finishing with 15 points on 5-of-18 shooting and 11 rebounds, his first double-double this season.

When it was over, Bryant found his family, two daughters and wife, sitting courtside, and he embraced them.

His final visit to this building marked their first, and he wanted them to experience a place that he said "has really meant a lot to my career."

He recalled one of his daughters struggling during a postseason softball game, striking out, and she was crying, mad.

"I showed her the video of us losing to the Celtics [in 2008] and me walking off the court crying," he said. "I said, 'Listen, it's fine. It's fine. You've just got to bounce back.' That's the kind of profound impact that this building has had."

Bryant left with a piece of the Garden's parquet floor, a farewell gift presented to him before the game, as well as a win, though the latter didn't mean much to him. Not really.

"It's really just the memory," he said. "It's the legacy of this organization and this franchise and the fact that I was able to play a small part in that rivalry is enough for me."

There were more and more chants in the final seconds -- his first name, his full name, even "Let's Go Lakers" -- and they continued after the final buzzer.

"Honestly, if I could chant for them, I would," Bryant said. "I don't think the fans here really understand how much they drove me.

"From the singing of the songs to the shaking of the bus going back to the hotel, that stuff really stuck with me. It drove me to maniacal proportions. I don't think they really understand how much they meant to my career.

"I wish I could do more to show my gratitude to them. I just try to say thank you as much as I possibly could."

All around the arena, fans donning green-and-white and purple-and-gold stood and chanted, "Ko-be! Ko-be!" With Bryant departing, so, too, is the last true vestige of the latest chapter of this storied rivalry, but he said he is confident it will be renewed some day.

But before he left the parquet one final time, disappearing into a tunnel while screaming fans craned over the railings, hoping for a high-five or just one last glimpse up close, Bryant lingered for as long as he has on the court following any road game this season.

He saluted the fans on all sides, tapped his heart many times, and while chants of "Ko-be!" rained down, he did what felt most fitting of all before bidding adieu to the Garden.

Kobe Bryant smiled, clasped his hands and took a bow.

Kobe drops double-double in Lakers' win
Kobe Bryant scores 15 points and grabs 11 rebounds in the Lakers' 112-104 win over the Celtics.