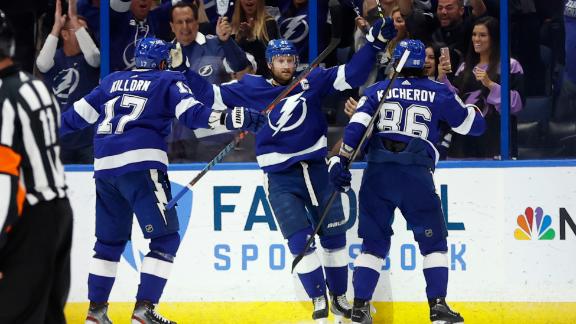 TAMPA, Fla. -- - Just when it seemed the game might be slipping away, Nikita Kucherov asserted himself for the Tampa Bay Lightning.

Two goals and an assist later Saturday, the resilient, defending Stanley Cup champions had a 6-4 victory and a 3-1 lead in their second-round playoff series against the Carolina Hurricanes.


"To be honest, he might have taken the game over," Lightning coach Jon Cooper said. "Clearly we lost control a little bit in the second period, and he'd been hit in a tough manner by one of their guys, and he just channeled his energy the right way.

"It was a 5-on-5 shift and he was just a beast out there. Then we had our power-play opportunities, and he was just making plays all over the place. He might have been the best player on the ice tonight. When Kuch is doing some of the stuff he did, he's borderline unstoppable."

Kucherov and Steven Stamkos each had a pair of goals and an assist, and the Lightning improved to 10-0 in games following a playoff loss over the past two postseasons. Game 5 is Tuesday night at Carolina.

Each team scored four goals in the second, with the Lightning turning a 4-2 deficit into a 5-4 lead. Stamkos and Kucherov scored on the power play and Tyler Johnson also beat Petr Mrazek in the final 5:22 of the period.

Teuvo Teravainen, Jesper Fast, Dougie Hamilton and Jaccob Slavin scored in the second for the Hurricanes. They hurt themselves by taking bad penalty after bad penalty while giving the Lightning six power-play opportunities.

"If you give that caliber of power play that many chances, it's not a recipe for success," Slavin said. "We've just got to stay more disciplined and play hard, but play smart as well and not give them chances that they don't need."

Tampa Bay finished 3 of 6 on the power play, and it has scored five times with the man advantage in the last two games.


Carolina had its highest scoring game of the series, too. But the Hurricanes were 0 for 2 on the power play and struggled after going up 4-2 on Slavin's goal at 12:41 of the second.

"It's weird. There were 11 goals in the series and to see eight go in in the second period, that was chaotic, it was a circus out there," Cooper said. "But definitely no refunds after that one. Take your coach's hat off. That was one helluva entertaining second period."

Vezina Trophy finalist Andrei Vasilevskiy weathered the Hurricanes' scoring barrage and didn't allow another goal the rest of the way. He finished with 21 saves.

"To be honest ... I think that was an opportunity where maybe he wasn't his sharpest, and we scored four on him - we need to win that game. He's probably not going to let four in again," Brind'Amour said.

Kucherov, who has 17 points in 10 playoff games this year, began the comeback with a power-play goal. Johnson made it 4-4 before Stamkos netted his second power-play goal of the period.

Kucherov scored off a nice pass from Ondrej Palat for a 6-4 lead just over six minutes into the final period.


Mrazek stopped just 20 of 26 shots after making his first start of this postseason and getting a 3-2 overtime win in Game 3.

The Hurricanes yielded the first goal for the eighth time in 10 games this postseason. Carolina went six straight games giving up the first goal until taking a 2-0 lead against the Lightning in Game 3.

The Lightning are 7-1 when they scored first this postseason, and 0-2 when they don't.

The Hurricanes played again without center Vincent Trocheck, who was injured during Game 2 when he collided with teammate Warren Foegele and limped off the ice. Nino Niederreiter remained sidelined, too, meaning Carolina was without its second- and third-leading goal scorers from the regular season. Foegele did play Saturday after suffering an upper-body injury in a collision with Lightning defenseman Erik Cernak. Meanwhile, Tampa Bay defenseman David Savard was back in the lineup after missing three games with an undisclosed upper-body injury.