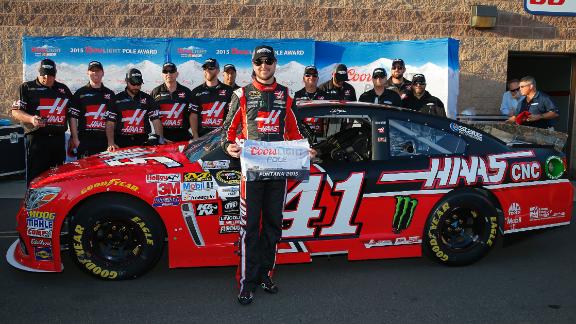 FONTANA, Calif. -- When Tony Gibson and his crew got paired with Kurt Busch for the final three races last year, it suddenly went from the job of developing Danica Patrick into a stock-car racer to returning Busch to a championship contender in 2015.

Then two days before the Daytona 500, those championship hopes evaporated as Busch was suspended after a Delaware family court commissioner determined he had committed an act of domestic violence against his ex-girlfriend last September.

So when Busch, who has called the allegations a fabrication, was reinstated March 10, about a week after prosecutors declined to file charges and given a waiver from the NASCAR requirement that a driver must start every race to be eligible for the Chase for the Sprint Cup, the Stewart-Haas Racing team all of sudden had those championship dreams in the front of their minds.

"We won the lottery right there," Gibson said last week after Phoenix. "We all believed in our heart the truth and we knew it. So that's what we rest on. We knew eventually we'd get him back, and we just had to have fast cars when he comes back."

Busch needed just 10 days to prove why the crew feels that way. He finished fifth last Sunday at Phoenix International Raceway in his first race back since the suspension and then went out and won the pole Friday for this weekend's race at Auto Club Speedway.

"They are such a strong group and have been together for many, many years and we just need to bridge from where we were last year in those final three races into 2015," Busch said. "We didn't get the start that we wanted, and here we are now, so let's just stay the course and run our pace."

The 2004 Sprint Cup champion reminded everyone why team co-owner Gene Haas started a fourth car for Busch in 2014 and had his company, southern California-based Haas Automation, sponsor the embattled driver. Haas even brought Busch to the company headquarters Thursday.

"Thank you Gene for believing in me," Busch said. "This is my job: Come to the track, drive the car and put it up on the pole and go for wins.

"That is what Gene has told me to do from the get go and I'm glad I have this chance to go back out there and live up to why he hired me."

Busch's speed of 185.142 mph in the final round of qualifying was just enough to earn the Auto Club 400 pole over SHR teammate Kevin Harvick (185.047), winner of the last two races and four of the last six dating back to his 2014 championship run.

The teams will have two practices Saturday in preparation for the race Sunday, and Busch has said he has been "putting the blinders on and focusing on the car" in the last 10 days.

"I called [Busch] every day, even when he was suspended," said Gibson, whose team had respectable races the first three events with Regan Smith as the replacement driver. "We talked every day. He was in our debriefs. He was part of our team. I kept [saying] the whole time, 'You're our driver, you're a guy and this is your team.' That has been our mentality since Day 1."

That mentality probably had as much to do with the pole as the fast cars.

"I'm proud of this company," Gibson said. "Stewart-Haas Racing stuck behind us through all this stuff and has been our biggest supporters. That's all behind us now. Nothing but win right now."