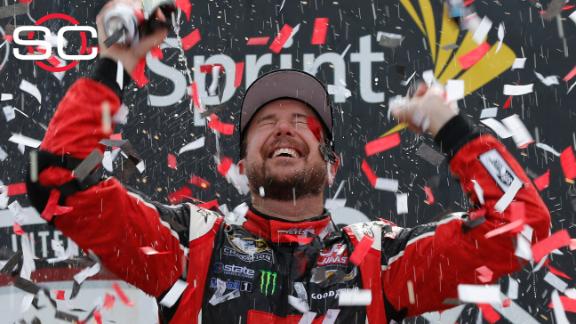 RICHMOND, Va. -- Kurt Busch has spent time this year in a Delaware courtroom then on NASCAR's sideline as he served a three-race suspension for an alleged domestic assault on an ex-girlfriend.

Now he has made a trip to Victory Lane, where Busch hoped his victory Sunday at Richmond International Raceway will help him close one of the messiest chapters of his volatile career.

"Standing on the truth the whole time, that gave me the feeling of, when I do get back to the car, it's going to be easy to focus, and I think I've shown that," said Busch, who still has a no-contact order against him that was issued in February by a Delaware Family Court judge, who ruled that Busch likely assaulted ex-girlfriend Patricia Driscoll in September.

The 2004 series champion dominated the rain-delayed NASCAR Sprint Cup race that was originally scheduled for Saturday night under the lights.

The Stewart-Haas Racing driver led a career-best 291 of the 400 laps on the 0.75-mile oval, outrunning teammate Kevin Harvick over the final dozen laps to end a 35-race winless streak.

Earlier in his return, Busch said he was trying too hard.

"I think I might have been driving too hard, too much of a chip on my shoulder, so to speak," he said, adding that he realized last weekend that there is danger in driving along the line that separates effectively aggressive and overly aggressive.

One week later, he has secured a spot in NASCAR's 10-race playoff.

"We're winners in April. It feels good," Busch said. "Plenty of time to do fun things to build the team up, get stronger, learn from all these races coming up and continue to go forward.

"Like [team owner] Gene Haas said: One win is great. I want four or five more."

Harvick, meanwhile, finished in the top two for the seventh time in nine races but said he had to rally after his car struggled on one set of tires and drifted back into the pack.

The race looked much like the Xfinity Series event Friday night in which Denny Hamlin led 248 of 250 laps and lost the lead only during green flag pit stops. This time, there were green flag lead changes, but only two -- when Busch passed Joey Logano after 94 laps to take the lead and when Jamie McMurray passed Busch after 262 laps.

Busch regained the lead under caution and never relinquished it, beating Harvick to the finish by 0.754 seconds. The victory was the 26th of Busch's career and second at Richmond.

Harvick was closing on Busch in the final laps but "just ran out of time," he said.

McMurray's pass came during a series of green flag stops, and when a caution came out on Lap 270, only three cars were on the lead lap, including Busch, who had just pitted. He stayed out, regained the lead and slowly pulled away from Justin Allgaier, who got up front because of the green flag stops.

"We just had a really good car after 40 or 50 laps," McMurray said. "Really, for us to have a shot at winning, we had to have a long green flag run at the end."

The day was especially disappointing for Hamlin, who grew up about 20 miles from the track and had a dominating Friday, qualifying second and leading 248 of 250 laps in the Xfinity Series race.

That, however, was before rain all day Saturday washed all the rubber off the track. When the race began Sunday, Hamlin began fading immediately. He went a lap down after 236 laps and finished 22nd.